skip to main content
Return to Fordham University
You are at:Home»Business and Economics»Apparel Designed by Gabelli School Student Makes Life Easier for Diabetics

For Corinne Logan, getting fitted for an insulin pump to manage her Type 1 diabetes was life changing—the pump meant greater freedom, eliminating the need to plan days around injections, finger-sticks, or the number of carbohydrates she needed to eat.

But having a bulky contraption attached to her hip was cumbersome for an athlete like Logan. So, she did what any innovator would do: she made her own solution. 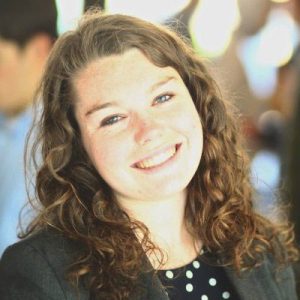 Corinne Logan, a Gabelli School of Business junior and the creator of Pumpstash

Logan, a rising junior at the Gabelli School of Business, is the founder of Pumpstash, LLC, a company that creates spandex shorts for women and girls with Type 1 diabetes who use an insulin pump and a continuous glucose monitor.

The shorts are fitted with pockets that keep the pump securely in place so that athletic apparel or skirts and dresses can be worn unimpeded.

The idea came to Logan while playing for her high school lacrosse team. During games and practice, her insulin pump would frequently get loose and bounce around.

“There were some options keep it attached, such as fanny packs or arm or thigh pouches—but nothing that would either stay in place or that me as a 16-year-old girl would be caught dead in,” said Logan, a business administration major with a minor in sustainable business. “I started to take it off during practice and games, but that wasn’t good for my numbers.”

Inspired by a pair of running pants that had a pocket to store keys, Logan wondered whether she could combine the sturdiness of her spandex lacrosse shorts with the convenience of a pocket.

She and her mom produced some sketches and took their design to a seamstress, who created the prototype. The Pumpstash shorts were born.

See a video demonstration on Logan’s Kickstarter page.
At Fordham, Logan took idea to the next level with a Compass Fellowship, a program to help first-year undergraduate students start a social venture. The following year she was accepted into the Fordham Foundry, which helped her turn her venture into her own company.

Logan is raising money through a Kickstarter campaign to fund the manufacturing process and get Pumpstash shorts onto the market.

“The Foundry has been a huge help and support system,” she said. “It’s a great community, because everyone has their own thing and their own expertise, so we’re not competing against one another. Everyone wants everyone else to succeed.” 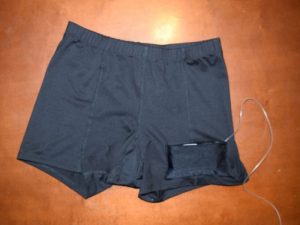 The shorts are 79 percent polyester and 21 percent spandex and are made with antibacterial and wicking properties. A pocket in the back—which is made from a stronger material, 80 percent nylon and 20 percent spandex—keeps the pump secure, while a pocket in the front provides storage for ordinary objects such as keys or a cell phone. Ten percent of the profits from each pair sold is donated to the Juvenile Diabetes Research Foundation.

It is important to continue funding research toward an eventual cure, Logan said. In the meantime, there are steps that can be taken to improve the quality of life for diabetics.

“Depending on how you look at it, I’m lucky or unlucky because I’ve never known life without it. It’s basically second nature to me,” she said. “But it can be really frustrating, especially if you’re in a situation that’s not a daily routine.”

Having that insider’s view of living with diabetes is at the heart of Pumpstash, Logan said, and is what drives her business model.

“It was important to me that this project be in the hands of someone dealing with [diabetes], rather than a bigger company. A big company isn’t necessarily thinking of little inconveniences that aren’t medically problematic but which could be fixed to make day-to-day life easier.”