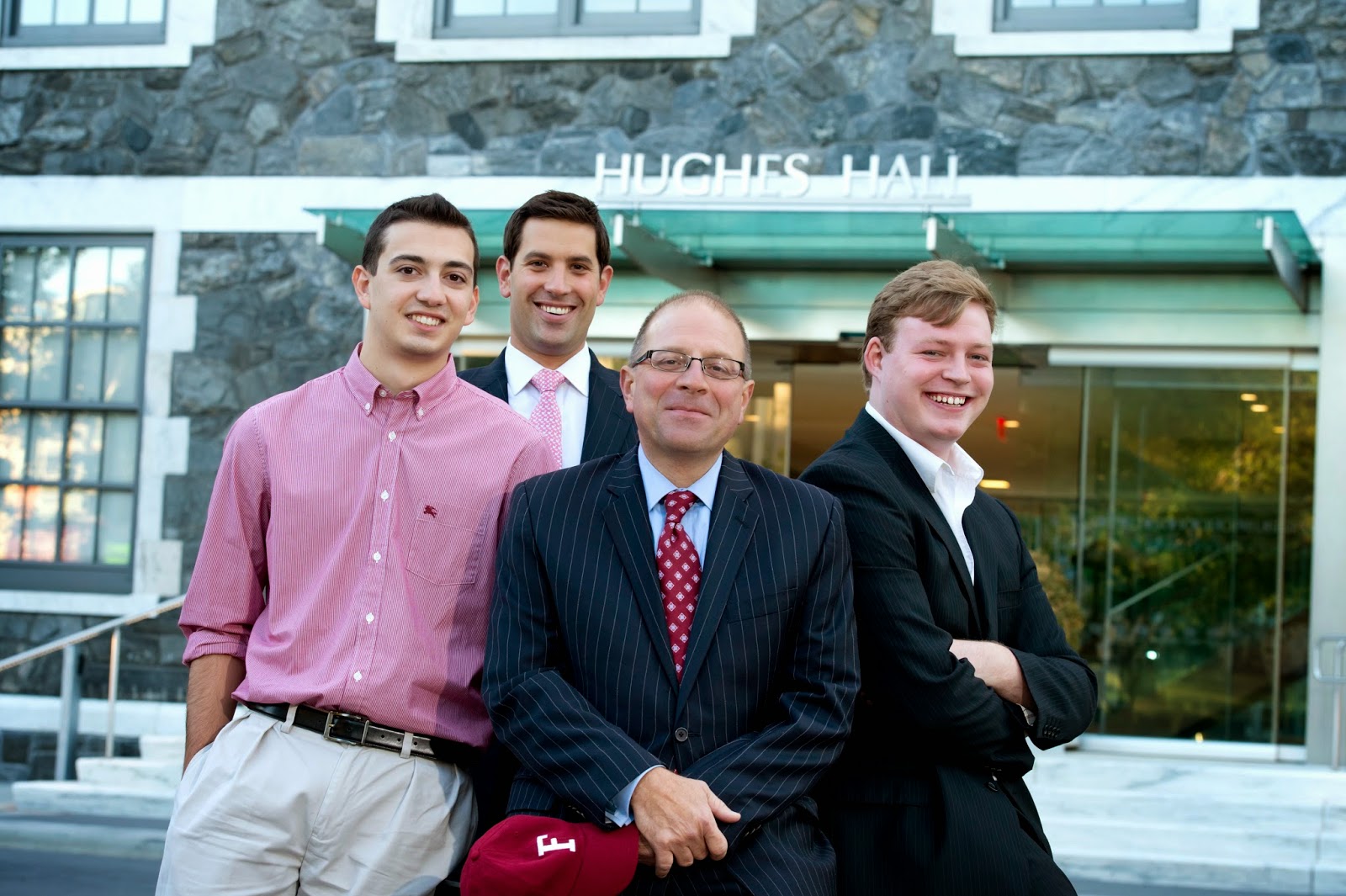 Jerry Getsos (center) with current and former interns (from l.) Alexander Milo, a Fordham junior; Michael Manzo, GSB ’00; and Michael Watts, a Fordham senior. Photo: Dana MaxsonJerry Getsos started hiring Fordham interns 17 years ago, not simply to help his company or because he knew how valuable Fordham students are in the workplace.

He started hiring Fordham students because he wanted to give back to his alma mater.

“I remember how tough it was for me to crack into the investment business,” Getsos says. “I decided this would be something I can give back to the school in my way.”

A son of Greek immigrants and a first-generation college student, Getsos earned a B.S. in finance and economics from Fordham in 1985, and an M.B.A. from the University in 1987. Today he’s a member of the Fordham parents community; his daughter Julia is a Fordham junior, while his son Peter is a freshman at the University.

Getsos started the internship program while working as the chief investment officer at Lepercq, de Neuflize & Co., and he continues it in his role as director of research and senior vice president at Klingenstein, Fields & Co., where he has worked since 2006.

He says because he has worked for small to mid-sized firms, he has had the opportunity to teach interns about all aspects of the investment business.

“When an analyst is working on something, the intern works right alongside him or her. Interns sit with us when we’re interviewing CEOs and CFOs,” he says. “They’re actually doing models for me, where other students may just be doing models in a classroom.”

Getsos is clear with interns that although there will not be a job at his firm for them after graduation, his primary goal is to give them the experience they need to build a rewarding career on Wall Street.

Michael Manzo, GSB ’00, interned for Getsos for two years as a Fordham undergraduate. After graduation, JP Morgan hired him as an equity research analyst, an opportunity for which he credits Getsos.

“I was the first equity research analyst from Fordham that JP Morgan had hired right out of school, and that was entirely due to Jerry and the experience I gained working with him,” Manzo says.

“The people I was hired with went to Georgetown, Brown, Wharton, and other ‘bigger’ schools. But nobody had the internship that I’d had, with that true asset management experience.”

While the work experience is immensely valuable, Getsos’ interns say that it is their boss himself who truly sets the internship apart.

Michael Watts, a Gabelli School senior who interned for Getsos in the summer of 2013, was struck not only by Getsos’ knowledge and natural ability to share his expertise but also by his character.

“Jerry’s an incredible teacher, extremely patient with college kids who are just striving to get their footing in the field,” Watts says. “He’s full of energy and passion for what he does. You want to work hard for Jerry.”

Getsos has lunch with his interns nearly every day, serving as a mentor not only on career opportunities and investment strategies but also on life and family.

“I’d love to be as good an investor as Jerry, but I’d be happy to be as good a person as he is,” Watts says. “Jerry is the quintessential Fordham man.”

Getsos does not seek interns with previous investment experience. He’s looking to find students who are hungry to learn about the field.

“They are raw in the beginning, but as typical Fordham students, they’re hard working, they show up, and they have a strong ability to learn,” he says.

Getsos’ commitment to opening doors to the investment business for Fordham students has inspired others to do the same.

Manzo currently works as an adjunct professor at Fordham. He says he has made it a priority to connect with students the way Getsos connected with him, making time to talk with students before or after class and offer advice on job opportunities.

“I have been directly or indirectly responsible for getting people jobs, and that’s something I am proud of,” Manzo says.

It’s that type of investment in the future of Fordham students that Getsos says inspires him to continue pouring time and energy into teaching his interns the ropes.

“There’s a rewarding feeling I get, when they’re still interning with me and about to graduate, and get that job at JP Morgan or Goldman Sachs,” he says. “That’s why I do it.”