skip to main content
Return to Fordham University
You are at:Home»Business and Economics»Alumni Spotlight: 1973 Graduate Is Stirring Up the Spirit of Jubilee

For Mark O’Connor, FCRH ’73, Jubilee 2013 (May 31 to June 2) is sure to be a story-filled weekend. The Long Island native is full of memories from his days on campus during the late 1960s and early ’70s, and now, as a Fordham parent, he’s creating new memories—and a deeper Fordham pride—with his sons Mark Joseph, a junior in the Gabelli School of Business, and John Thomas, a sophomore in Fordham College at Rose Hill. O’Connor, vice president and general counsel at Hatch Mott MacDonald, is also leading the charge for his 40th reunion. 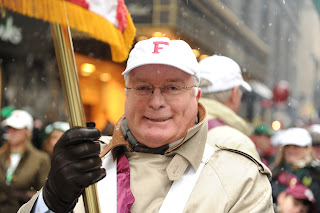 Why did you go to Fordham? Did the fact that your father [Lester T. O’Connor, FCRH ’36] was a graduate motivate you to apply?
Absolutely. It’s the only school I applied to. My father went there and I also had to have a place that was in striking distance of where I was working at the time. I was orphaned at an early age and I did anything and everything I could to make enough money to put myself through four years at Fordham. I was working a couple of jobs at a golf club and I was working at a pizza parlor on weekends, so I needed to get back to the Long Beach area in order to meet those obligations. Those were the two reasons I went to Fordham.

What did you think about your time at Fordham? What sticks with you from those days?
I loved it. I thought it was great—the camaraderie, the exposure you had to other people and their lives. I count 20-plus guys and gals with whom I remain in meaningful contact who attended Fordham with me. It’s that and also the idea that you have to help other people. That’s a real Jesuit underpinning and I really enjoy doing it.

What does it mean to you to have two sons at Fordham?
I am enormously proud of that fact! It’s a huge thrill for my wife [Lorraine] and me. I am so proud to tell people that both our boys are currently Fordham undergraduates. And they are now the third generation of O’Connors who have attended Fordham University. That’s another fact of which I am hugely proud. My youngest boy commutes down to Fordham [from our home in New Rochelle]every day. It takes him maybe 10 to 15 minutes. MJ has a really nice place over in the Little Italy section with three of his buddies from grade school (who are also attending Fordham). He’s within a stone’s throw of the campus so it’s worked out well. They’re both doing very well academically. So I couldn’t be happier about that. It gives me unlimited chance to return to the beautiful Rose Hill campus and admire how much it has improved visually and academically.

When did you reconnect with Fordham?
I could kick myself in the rear end for this but it’s only in the last couple of years. I really started at the 35th Jubilee, which was five years ago. And since then, because I think my boys are now there, I’ve done more things every year. My latest and bestest interest is doing all things Fordham. The first thing I did was join thePresident’s Club. I went to the Founder’s Dinner this year. I joined the mentoring group. It’s been so much fun. I am having an absolute ball working with Brianne Laurin [Assistant Director for Reunions] in stirring up interest in and attendance at Jubilee.

How did you get involved with Jubilee?
Five years ago, for our 35th reunion, there were only seven people from my class there. I was upset by that because I was really looking forward to seeing so many people. Rich Brautigam [FCRH ’73] and I got together and said we’ve got to call everyone we went to school with and get them to come to our 40th Reunion because it really is a wonderful weekend. That dinner that they throw? It’s like a first-class wedding with a thousand of your best friends.

Last September, I was on the Fordham website and I saw they had a marker for Jubilee 2013. I contacted Brianne and volunteered our help in contacting fellow classmates. So over the past couple of months I’ve been calling or e-mailing everybody I could get a hold of who was a member of the Class of 1973. I’m up to almost 100 contacts. It’s so much fun to talk with these guys about what we did back then and what we’ve been doing since.

The Fordham alumni relations office has many fun activities planned for the Jubilee weekend; what can your classmates expect?
Rich is going to focus on the 1973 NBA Champion New York Knicks. It was an extremely colorful team, just a terribly interesting bunch of guys. Walt Frazier, Dave DeBusherre, Earl Monroe, Phil Jackson, Bill Bradley, Dick Barnett [who played nine seasons with the Knicks and went on to earn a doctoral degree from Fordham’s Graduate School of Education in 1991]. I caddied for Dick Barnett one time in the summer before my junior year when I was working at Lido Golf Club on Long island. He was a hell of a golfer, and absolutely wonderful to caddy for. My part is going to be a “stand-up” comedy routine about how much things have changed—and how much they have stayed the same—up at Rose Hill. It’s going to be an event to remember, rest assured!

What does it mean to you to give back as an alumnus?
I think it’s great. I think of it as a labor of love. A key Fordham tradition is giving back to the University; its campus, staff, and alumni base. Like doing this [conversation], I had a ball doing this because it brought back all those memories.

To find out more about Jubilee and to register, click here.