skip to main content
Return to Fordham University
You are at:Home»Business and Economics»Accounting Professor Seeks Clues in Market Data

“For most of my projects, I just open up academic journals, flip through them and find something interesting,” he said. “And I keep reading and then think ‘I could do something about this.’” 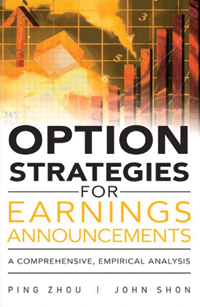 That “go-wherever-things-are-interesting” attitude has led Shon, an assistant professor of accounting in the Fordham Schools of Business, to a wide variety of projects.

His recent research has touched on insider trading, research and development (R&D) expenditures, the effects of market sentiment on sell-side analysts’ credibility, and option-trading strategies around earnings announcements.

His most recent paper, “Insiders’ Sales Under Rule 10b5-1 Plans and Meeting-or-Beating Earnings Expectations,” co-authored with Stanley Veliotis, Ph.D., assistant professor of accounting and taxation, will appear this year in the journal Management Science.

Shon and Veliotis examined data to determine whether company CEOs actively engaged in efforts to meet or beat earnings expectations when there was a pre-commitment to sell their equity shares. Rule 10b5-1 was instituted by the Securities and Exchange Commission in 2000 to allow company heads to sell stock without raising suspicions of insider trading, by letting them pre-commit to selling a set number of shares on a date in the future.

“[We] flip it on its head and say look, if CEOs pre-commit on the front end to selling their shares, they’re just more likely to go out of their way to make sure the stock price increases at the time they need to sell,” Shon said.

“We ask, ‘Are CEOs more likely to meet or beat earning expectations if they pre-committed to selling shares beforehand?’ And we find what is perhaps pretty obvious to some critics—which is that they are.”

Shon and Veliotis confirmed these suspicions by analyzing data collected by a private firm from forms that executives file to indicate that they plan to execute a trade under Rule 10b5-1.

And while the data are clear, the “take” on such practice is two-sided. One camp says that “CEOs are fleecing all of us, including the shareholders,” he said.
“The other camp says ‘Look, for every dollar they’re getting compensated, they’re adding 10 dollars to shareholder value, isn’t that what you want?’ There’s a valid argument on both sides.”

The machinations of the stock market are of particular interest to Shon. In 2010, he published “Do Stock Returns Vary With Campaign Contributions? Bush versus Gore: The Florida Recount,” in the journal Economics & Politics. In 2009, the Journal of Accounting, Auditing, and Finance published his article, “Are Earnings Surprises Interpreted More Optimistically on Sunny Days? Accounting Information and the Sunshine Effect.”
When it comes to establishing a connection between earnings reports and the weather, Shon said he wasn’t surprised to find a slight “bump” in earnings, as psychology literature is full of examples of how people tend to commit fewer suicides and tip better when it’s sunny outside.

Not every investor is so easily swayed by outside conditions, though. Shon found that smaller, less sophisticated ones, such as those who make small trades on eTrade, were more likely to be affected by sunnier weather.

“It’s not the sophisticated Warren Buffetts of the world. And even if the less-sophisticated investors do bid up the price of a stock, the magnitude is quite small, like one percent higher than they should be,” he said.

“So if the stock price is $101 instead of $100, in the next two or three days, you find that extra dollar that shouldn’t have been there anyway gets eaten away at, by essentially the smart money.”

Shon’s latest paper, “Temporary R&D Cuts and Meeting-or-Beating Earnings Expectations,” which he co-authored with Meng Yan, Ph.D., assistant professor of accounting and taxation, addresses another curious phenomenon that is often timed to help meet or beat earnings expectations: the cutting of R&D expenditures.

When a company is at risk of falling short of its earnings expectations, it’s not uncommon for it to cut R&D expenses as a means of boosting profits.
“This is preposterous, right? How can you stop the long-term viability of your company just to meet some earnings number? But it has been documented by Fortune 500 CEOs’ comments in surveys,” Shon said.

In the paper, Shon and Yan measure whether a company is merely slashing R&D costs to make up for a short-term fall in profits, or if the cuts are a symptom of a larger problem.

“One of the best ways to predict whether R&D will ramp back up is to look at when [a company]cuts R&D. Did it just meet or beat their earnings expectations? Because if it just met its earning expectations and it [simultaneously]cut R&D, there’s a really good chance that it cut their R&D to meet those expectations.

“Those are the guys that are going to ramp back up,” he said.