skip to main content
Return to Fordham University
You are at:Home»Business and Economics»Professor Takes a Multifaceted Look at Business 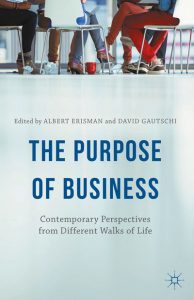 Gautschi, the Joseph Keating, SJ, Professor of Marketing and dean emeritus of the Gabelli School of Business, co-edited a new book with Al Erisman, PhD, executive in residence at Seattle Pacific University’s School of Business and Economics.

The Purpose of Business is a snapshot of the university’s Fordham Consortium, a series of conferences held from 2009 to 2013. The consortium brought together business leaders, academics, military officers, government representatives, artists, and clergy. Its purpose was to examine business from a variety of unconventional angles. Conferences took place around the world, providing the “perspectives from different walks of life.”

The book’s ethical and cultural dimensions reflect industry soul-searching in the aftermath of the 2008 economic crisis, said Gautschi.

“As is typical in a crisis like that, people started pointing fingers,” he said. “I thought we can’t pick up this question about business ethics every five or six years—we need to get down the primitives, as the book’s title suggests.”

In the book, Gautschi writes that for business to be recognized as a respectable social institution, representatives from all facets of society need to be engaged in understanding its purpose. But in a culture that encourages specialization, a broad-based examination of business gets discouraged, both inside and outside of the business world.

Many of the conferences took the executives outside of their comfort zone—asking them to interpret a scene from Shakespeare or improvise jazz, and then relate it back to business.

Another conference in 2011 in Istanbul on business and geopolitics included an examination of how Islam, Judaism, Buddhism, and Christianity view business. At that conference, Patrick Ryan, SJ, the Laurence J. McGinley Professor of Religion and Society, delivered a lecture that brought Hellenistic gods into the mix, particularly Hermes, “the god of the market and also the trickster god.” Father Ryan contributes a chapter to Gautschi’s book, “God and the Market: Four Settings in the Eastern Mediterranean.”

“They were asking philosophical questions that are often not asked in business,” Father Ryan said of the conference. “I focused on when business history began, on loans, and on usury, which eventually became the focus of a McGinley Lecture.”

Together with Jonathan Story, PhD, Gautschi also contributes a chapter titled, “The Business School: Serving Mammon or the University.” Story is the Emeritus Professor of International Political Economy at INSEAD in Fontainebleau, France.

Like Father Ryan, Gautschi also drew on the conferences for further research, even creating a new course. The Business and Energy session held at Fordham’s Westchester Campus spurred a seminar titled “Innovation in Business and Energy.”

Gautschi said the diversity of views was entirely intentional and are captured in the book.