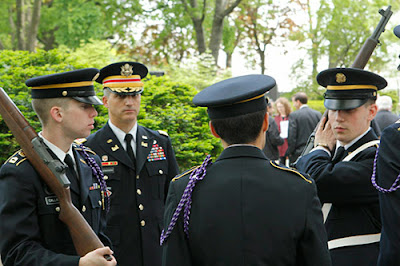 Graduate School of Business Administration (GBA) Dean David Gautschi was on-site on Nov. 13 at McMahon Hall for the first info-session for the upcoming US/UK Veterans Entrepreneurship Program, in conjunction with the School of Professional and Continuing Studies.

Gripping a copy of the Financial Times with the headline “Fordham Lends US and UK Military Veterans an Entrepreneurial Hand,” Gautschi, himself a military veteran, said the concept for the certificate program was hatched this past June over dinner with several military veterans, several Fordham alumni, and a representative faction from Britain. He added that the program is already creating a bit of buzz in the UK, where it will no doubt rally support in the form of a wintertime fundraiser before the official launch in spring 2014.

With cohorts attending courses in New York and London, Gautschi explained that though the veterans will be indoctrinated into the contemporary context of business, they’ll also explore critical thinking through the reading of literature and plays.

“The whole program is very motivated by the Jesuit approach,” he said.

After four weeks of the basics, students begin a social immersion project where they work with a disadvantaged population through a non profit or NGO.

Gautschi said that while the social immersion aspect also exemplifies the Jesuit mission, it also holds practical implications for vets adjusting to civilian life, particularly for those who saw combat and witnessed human suffering.

“Coming back to the comfort of the UK or the U.S., vets have got to understand that the kinds of problems [they saw in battle]persist even here in our own society,” he said. “Vets can apply a lot of their experiences, perspectives and even they’re training to a disadvantaged population.”

Finally, students get to what Gautschi called the “enterprise builder” part of the program.

“That’s the guts of it,” he said. “For about five months they work with their ideas to see if they can commercialize them and build a business around it.”

Students will be coached by mentors through the GBA network, and GBA students will be drafted to take part. The vets will also get subject matter experts to help them “bone up areas they need help with.”

Finally they get to stage four, which he called the forum, where vets practice presenting their business ideas to a forum of critics who challenge them. There they learn how to articulate elevator pitches. The last component allows students to pitch to an audience of prospective investors seeking to invest in veteran-related startups.

“The whole concept of the university is that we want to learn from each other,” said Gautschi. “Those veterans who are coming into this exercise are going to teach us as much as we teach them.”