skip to main content
Return to Fordham University
You are at:Home»Athletics»Women’s Hoops Wins First-Ever A-10 Championship

March 18: In her 28 seasons on the bench, Women’s Basketball Head Coach Stephanie Gaitley has made a living off of stellar defense. But in the final A-10 playoff in Richmond, Va., on March 9, her Fordham Rams brought the term “lockdown” to a whole new level, setting an A-10 Championship record by allowing just 41.3 points per game and clinching Fordham’s second NCAA berth in program history.

As of publication, the Rams were heading to Waco, Texas, for an NCAA First Round matchup against the Cal Golden Bears on March 22. The announcement was made at an NCAA Selection show sponsored by ESPN and held in the Rose Hill Gymnasium on March 17(see photo).

This is Coach Gaitley’s third Atlantic 10 title and her eighth NCAA Tournament appearance. “It was a complete team effort from all levels to get this far,” Gaitley said. “They have to bring it every day.” 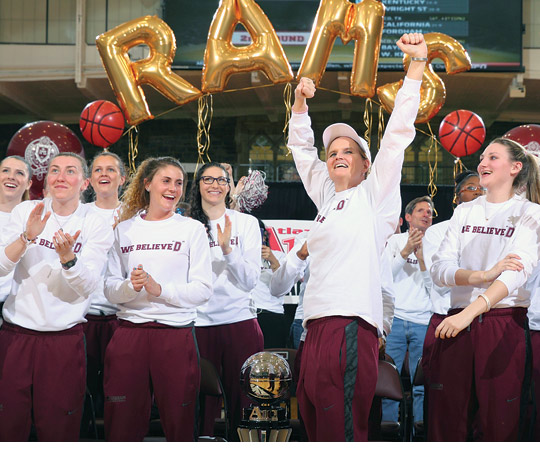 Stephanie Gaitley and her team, NCAA-ready.
Photo by Vincent Dusovic