skip to main content
Return to Fordham University
You are at:Home»Athletics»Women’s Basketball Loses A-10 Final by Just One Point 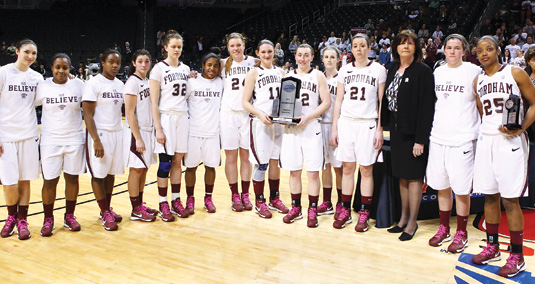 The Fordham Women’s Basketball Team accepts the 2nd place trophy from Atlantic 10 Commissioner Bernadette McGlade, following the A-10 playoff at the Barclay’s Center. 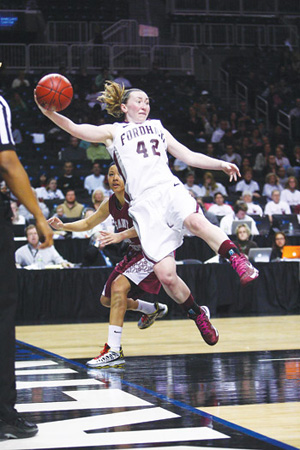 Junior Abigail Corning stops a ball from going out of bounds.
Photos by Vincent Dusovic

When a news reporter recently asked Coach Stephanie Gaitley to describe her team, she responded without hesitation. “Magic.”

Unfortunately for the Rams, the magic came up just short of an automatic NCAA berth, as Fordham fell to Saint Joseph’s, 47-46, in the Atlantic 10 Championship Game in the Barclays Center on March 16.

Erin Rooney and Marah Strickland were named to the All-Tournament team. Strickland scored a game-high 16 points in the loss. Abigail Corning had 12 points, including two clutch threes near the end of the game, and seven rebounds on the night.

Although Fordham entered the locker room at halftime with a 24-16 lead, the Saint Joseph’s team crept back, rattling off 12 points in a row to put the team up with 10:42 to go in the game. From there on, it was a close fight to the finish. With two minutes to go, the game was tied 45-45, when the Saint Joseph’s team hit two from the free throw line to capture a two-point lead. After over a minute without a change in the score, a Saint Joe’s foul sent Rooney to the line for a pair. She made the first, but missed the second. In the final seconds, a three-quarter court heave by Strickland fell short, and the Hawks emerged with a 47-46 victory.

In spite of the heartbreaking loss, the Women Rams finished up with an astounding regular season: The March 16 game was only Fordham’s third loss in their last 20 games. They ended with 24-8 on the year—the third-best-ever season in the history of Fordham Women’s Basketball. And on March 19, the team won a bid to play in the National Invitation Tournament (NIT)—a first for Fordham Women’s Basketball.

The official attendance at Barclays was 4,436, setting a new record for an Atlantic 10 women’s championship game.