skip to main content
Return to Fordham University
You are at:Home»Athletics»With Fundraising and Student Support, Fordham Basketball Launches New Era
Antrell Charlton takes a shot during the Dec. 9 matchup against Long Island University, which the Rams won 73-57. Photos by Vincent Dusovic
The hope and expectations have been palpable at Rose Hill this fall as the men’s basketball Rams have taken to the court for their first season under new head coach Kyle Neptune, and as the women’s basketball Rams have gotten off to a strong start with wins over tough competitors.

Indeed, the name of the fund—the New Era Fund—reflects the hope that men’s basketball can begin anew after past struggles and that the women’s team can continue its past success.

“Our overall goal right now is to build something from the ground up, something that people are proud of, and want to invest in, because they think it’s special,” Neptune said.

The new fundraising effort is fueled by a belief in the potential of men’s and women’s basketball to advance the University generally—and a hunger for a new winning culture in the men’s program, which has had just two winning seasons since joining the Atlantic 10 in 1995.

For Every Fordham Student-Athlete

As part of its current fundraising campaign, Cura Personalis | For Every Fordham Student, the University is seeking new investments in all sports programs, including men’s and women’s basketball, to enhance the student experience in multiple ways: by supporting student-athletes’ overall development; by stirring new Fordham pride on campus; and by bringing new renown to the University.

Other universities “have really used athletics and maximized them … to elevate the profile of the university,” said Darlene Luccio Jordan, FCRH ’89, a Fordham trustee, co-chair of the campaign, and leader in athletics fundraising. “Strong athletics goes hand in hand with [the]student experience, so it fits perfectly into this campaign and the large themes of the campaign.”

She also noted the potential for athletics to draw interest from donors who start by supporting athletics but go on to invest in other areas, including endowed professorships and financial aid. 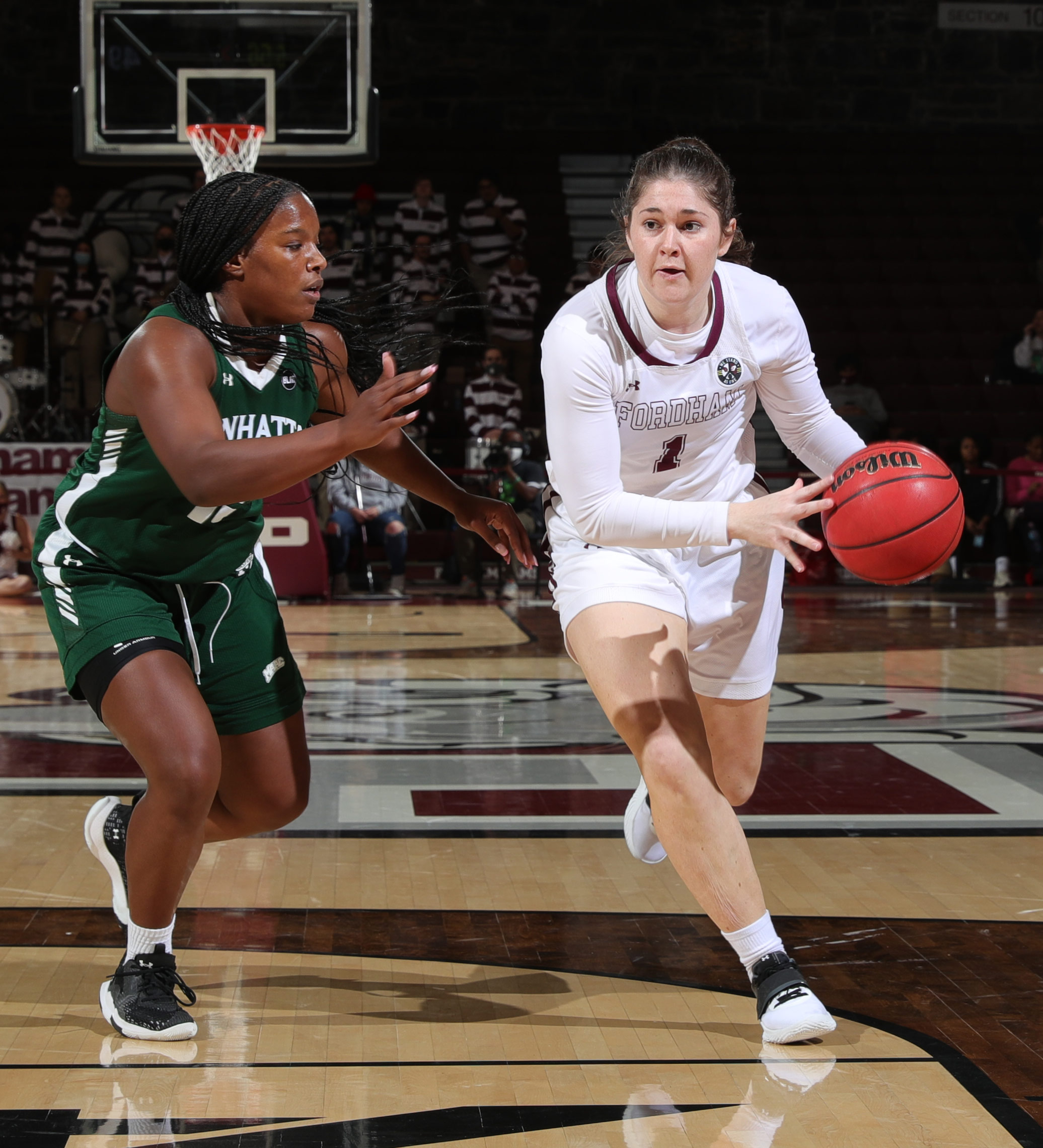 Don Almeida, GABELLI ’73, another University trustee and a Cura Personalis campaign cabinet member, said a strong basketball program can draw in lots of new non-alumni donors who are excited about athletics. It can also signal excellence at the University more generally, and showcase Fordham not only nationally but also globally, in part by leveraging the University’s New York location, he said.

“It’s not [just]about basketball. Basketball is the enabler,” he said. “It’s the method by which Fordham can leverage all its good attributes with a national and international profile and with donors, alumni, students, parents, and others.”

“If you have a national profile, you’re on national TV, you’re in the national press, and everybody gets to know real quickly what Fordham is,” he said.

And new investment in the team is essential, Neptune said. “We’re going against a really, really good league,” in which multiple schools are spending two to four times as much on their teams, he said.

The New Era Fund has drawn more than $3 million in giving to date. It offers support for the men’s and women’s programs in hiring and retaining a talented coaching staff, Kull said, in addition to other things such as marketing, production equipment for recording games, and software to help players analyze the performance of teams they’re about to play against.

It could also fund facilities renovations or charter flights that minimize the disruption of student-athletes’ academic schedules by providing faster, more convenient travel to and from games, he said.

Meanwhile, Fordham athletics is also working with a student group dubbed the Herd (formerly Fordham Fanatics) to build new enthusiasm for basketball and all other sports teams at the University.

The basketball season began with a Nov. 4 “Late Night on the Hill” celebration at the historic Rose Hill Gym; rap star A$AP Ferg performed for a crowd of 2,700 students, with student-athletes in attendance. And the Herd’s five student organizers are corralling students via social media and other means to fill the stands for all Fordham sports—from basketball and football to water polo, swimming and diving, softball, and everything in between—and restore the athletics energy that was muted last year because of pandemic lockdowns.

“Already this year there’s been a huge culture change in the fan base,” said one member of the Herd, Dillane Wehbe, a swim team member and a senior at the Gabelli School of Business. “That’s what we’re really going for, just to make the whole experience better—for students to … have fun at the games, for athletes to really feel like they’re being supported by their school.

Another Herd member, women’s basketball team member Kaitlyn Downey, also a senior at Gabelli, is happy to be playing in front of others again after a year of games in “quiet, quiet gym,” with only a recording of applause. “You never really appreciated it, having fans in the stands, until you realize what it’s like when there’s none there,” she said.

Both the women’s and men’s basketball teams are off to encouraging starts, with the men having won seven of their first 12 games and the women surging to 8-3 on a four-game win streak. The Herd members are trying to fill the Rose Hill Gym for home games for both men’s and women’s basketball to fire up the players and fuel their success, said another member of the team, Thomas Aiello, a junior at Fordham College at Rose Hill.

“Just trying to get that feeling back is so imperative to … everything that we’re trying to do,” he said. “When the Rose Hill Gym is full, there’s nothing like it at all.”

To ask about contributing to the New Era Fund, contact Kara Field, director of athletic development and assistant athletic director, at 212-636-8896 or [email protected].