skip to main content
Return to Fordham University
You are at:Home»Athletics»Two to Talk About

Two standout seniors were honored at this year’s annual Block F. Awards Dinner on April 29, which recognizes student-athletes for their accomplishments during the academic year. 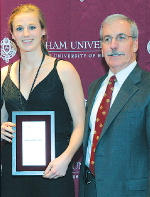 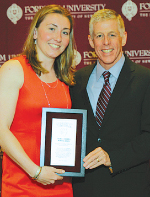 Rooney, a First-Team All-Atlantic 10 and First Team All-Met selection, led the Rams with 17.5 points, 7.3 rebounds, 5.2 assists and 1.3 steals per game, becoming the first player in Fordham history to tally at least 500 points, 200 rebounds and 150 assists in the same season. In just two seasons at Rose Hill, the Christchurch, New Zealand native tallied 1,062 points.

Corning was a four-year member of the women’s basketball team. Serving as one of the team’s captains this winter, she was named first team Capital One Academic All-District and Academic All-Atlantic 10.

Both women were part of a team that raised Fordham’s first women’s basketball Atlantic 10 championship banner.