The 2011-2012 men’s basketball season officially began on Nov. 9 at the annual Tip-Off Dinner at the Roosevelt Hotel in Manhattan, where fans gathered to meet this year’s squad and to honor the 1991-1992 Patriot League championship team.

Master of ceremonies Chris Carrino (GSB ’92), the radio voice of the New Jersey Nets, noted that he broadcast games for the 1991-1992 team on WFUV when he was a student. He spoke of how much he enjoyed that season and how, despite broadcasting many NBA games, the highlight of his career was calling the Rams’ first round NCAA tournament game in Worcester, Mass., in 1992.

Joseph M. McShane, S.J., president of Fordham, asked the crowd to cheer the team and its head coach, Tom Pecora, at home games.

“Let us fill the Rose Hill Gym to capacity,” Father McShane said. “Let us have crowds the size of the crowd we had at the St. John’s game last year, so that we will have the benefit of the Sixth Man with us at every game. Let us believe. Let us trust the coach; let us cheer the players, confident that they will—as Fordham players always do—wear the Maroon with pride and represent us very well on the court.” 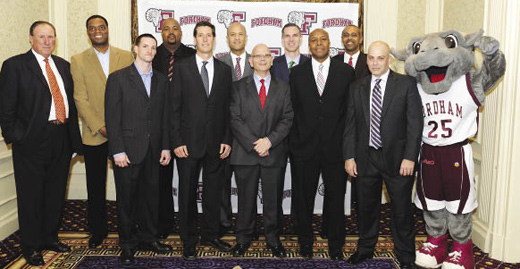 Members of the 1991-1992 Patriot League Championship team gather at the 2011 Tip-Off Dinner.
Photo by Chris Taggart

Michael A. Puglisi (GSB ’72), speaking for the benefactors who helped stage the event, encouraged the guests to support the basketball program.

Puglisi highlighted the success of the Fordham Men’s Basketball Challenge fundraising initiative, noting that $2.5 million of the $3.5 million goal already has been raised. The Basketball Challenge has made it possible to renovate the locker room and coaches’ offices, as well as build a new video room, he said.

“To paraphrase that icon we all know as Father McShane: It is time for Fordham men’s basketball to return to its rightful place as a team that is competitive at the national level,” Puglisi said. “But to do it, we need you to join us.”

Pecora introduced his team and recognized the 1991-1992 squad and congratulated them on their success.

“It’s an honor to be with the 1991-1992 team, as it was last year with the 1970-1971 team,” Pecora said. “They were both special teams—teams we hope to emulate. To get ourselves back on track there are certain things we talk about, and the biggest is the Fordham Basketball Challenge. We can’t do it without your help.”

Pecora also announced that Fordham is finalizing a television package with the YES Network to broadcast four games from the Rose Hill Gym this winter.

“We’re just scratching the surface of what we can do at Fordham,” he said.

Executive Director of Athletics Frank McLaughlin pointed out to the current Rams that the 1991-1992 team began the season with a 3-8 record. But with the guidance of coach Nick Macarchuk, the team stuck together and won the Patriot League championship.

“The thing I remember most about that team is that they won with class,” McLaughlin said, “and that’s a great example for the guys on this year’s team.”