skip to main content
Return to Fordham University
You are at:Home»Athletics»Student-Athletes Honored at Breakfast for Champions

Five days after the New York Giants football fans feted their team with a victory parade in Manhattan, Fordham University recognized 308 student-athletes as champions at the Ninth Annual Breakfast for Champions in the McGinley Center, held on Feb. 12. 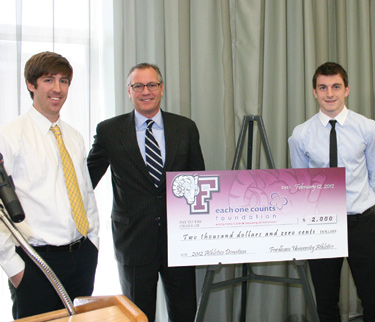 The Rams in attendance were honored for compiling a 3.0 cumulative GPA or higher. The event was sponsored by the Fordham Athletic Department, with assistance from the Student-Athlete Advisory Council (SAAC), and the Office of Academic Advising.

The 308 in attendance represented more than 58 percent of Fordham’s student-athletes. This year’s group represents the second largest number of student-athletes to be honored for their exceptional academics; last year’s annual breakfast recognized 319 students.

“We honor you here today for your success both athletically and academically,” said Frank McLaughlin, executive director of athletics. “You represent Fordham in so many different ways, especially with your outstanding community service. You are changing people’s lives and we are proud of all of you.”

Joseph M. McShane, S.J., president of Fordham, congratulated the student-athletes for their exploits, both on the playing fields and in the classroom. He pointed to a recent article in the Chronicle of Higher Education that questioned whether college athletics should be reengineered or terminated, in light of recent collegiate scandals and low graduation rates for some NCAA schools.

“When I read that story I thanked God for all of you because you stand as proof that the student-athlete exists,” said Father McShane. “You give us credibility and you give the Atlantic 10 credibility.”

The event’s keynote speaker was Brian Harrington, founder of the Each One Counts Foundation, a charity for chronically and terminally ill children receiving palliative or hospice care. Harrington, a member of the 1985 Villanova NCAA men’s basketball championship team who became the team’s graduate assistant coach, talked about how a near-miss with death led him into philanthropy: he was scheduled to be on United Airlines Flight 93 on Sept. 11, 2001, when a client canceled a meeting.

To date, he said, his charity has “helped ease the pain of 20,000 children through their final days of life using different forms of therapy, including massage, hydro and music therapy.”

Student-athletes Sam Jolly, FCRH ’12, and Ryan Curran, GSB ’13, both members of the men’s soccer team, presented Harrington with a check to his foundation from the SAAC.