skip to main content
Return to Fordham University
You are at:Home»Athletics»Star Pitcher Hopes to Balance Career of Art and Softball

Jen Mineau’s first exposure to softball came when she had to pick between it and soccer in her physical education class. 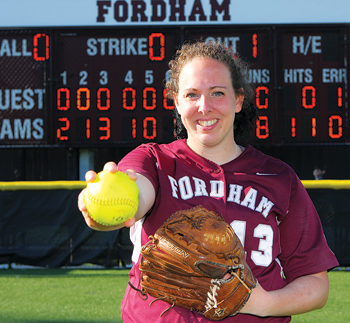 Following graduation, softball pitcher Jen Mineau, FCRH ‘12, will go to the Akron Racers and work for an advanced degree to teach art.
Photo by Vincent Dusovic

“It was a hard decision, but I chose softball—the uniforms looked better,”Mineau said jokingly.

The graduating Fordham College at Rose Hill (FCRH) senior is also the senior pitcher for the team. In 2011, she was named an ESPN Pre-Season All America, First Team member, and was also selected for the USA Softball National Collegiate Player of the Year Watchlist.

“I hated it my first year,” she said. “I was placed in the outfield and was always bored. So when I told my dad that I wanted to be closer to the ball, he said, ‘Well, let’s try pitching.’”

Apparently it worked. Mineau has already been drafted by the Akron Racers, and she is graduating as the school’s all-time leading pitcher.

“It’s been an overwhelmingly positive experience,” Mineau said. “On the day of the draft, everyone threw a party for me; it was nice to have everyone with me while it happened.”

Before Mineau came to Fordham, she pitched on her high school varsity softball team at Hoosic Valley Central School in upstate Schaghticoke, N.Y. She was recruited to Fordham’s team as a freshman and has been pitching for all four years.

Mineau has deftly handled some of the challenges of training for softball’s central position.

“As a pitcher, my physical training needs are different from someone out in the field. As a senior captain, I have had to work my way around these differences to help my team.”

Mineau’s strongest pitch is her curveball—one that breaks to the left and usually registers in the speed range of the low sixties.

Before each game, she prepares by researching the statistics of the other team, and most importantly, doing spin work with her throwing hand.

“I’m a movement pitcher,” Mineau said. “What makes me effective is how my ball moves, and this comes from me spinning the ball with my fingers and wrist.”

In addition to her softball successes, Mineau is also an Academic All-American who has maintained a 4.0 average this year in her studies. She is graduating with a major in visual arts and a minor in sociology, and has plans to study towards a master’s degree to become an art teacher. At Fordham, she has enjoyed balancing her two passions—art and softball. Art, in fact, has offered a bit of a respite away from her busy softball schedule, she said.

“Sometimes it’s hard because you need a lot of studio time for art that you can’t take on the road,” Mineau said. “But the art department here has been very understanding about my time constraints as an athlete.”

Following graduation, Mineau will play with the Akron Racers through the 2012 season. Then, she said, she is going to seek a coaching position, and pursue her teaching dreams. Mineau feels that her next step into coaching is a natural one—her own coach, Bridget Orchard, has been a role model.

“She’s been with me throughout the whole pre-draft recruiting process,” Mineau said. “She’s also fostered a sense of family with the team—we’re always with each other.”