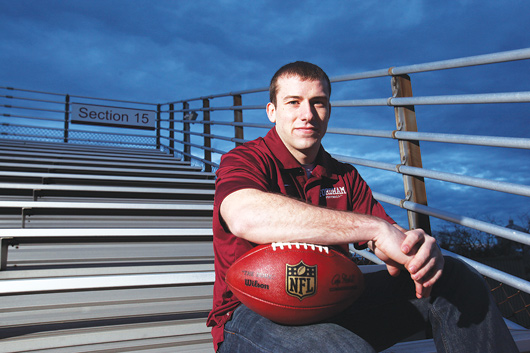 Murray dedicated his season to a childhood friend, Vincent Crotty, who was killed in a car accident in March 2010 as Crotty, 18, drove to baseball practice at Suffern High School in Rockland County.

With the Rams primed to improve on 2011’s one-win season, Murray had extra incentive to excel during his senior year in the Bronx. Before the start of every game last year, Murray wrapped his left wrist with tape, on which he would mark the initials “VC” in his friend’s honor.

“I wanted to make it special . . . to know there was a bigger reason to play for,” he said of his final year of college ball. “I definitely know Vincent was there watching over me.”

In the best-ever season for a Fordham kicker, Murray led the football team in scoring with 105 points, was named Patriot League Special Teams Player of the Week seven times and earned consensus All-America honors as well as numerous student-athlete accolades. The team went 6-5, its first winning season since 2007.

Murray, 21, will graduate with a degree in finance this spring. Meanwhile, he is immersing himself in the minutiae of portfolio management and global investing to keep up the near-4.0 GPA he is carrying in his major.

Poised and focused, Murray has also found time to volunteer in the community, where he and teammates work in a Fordham Road food pantry and visit local elementary schools to talk with kids about college.

His breakout season has put him on professional scouts’ radars, a tantalizing outcome for Murray, who in his youth was drawn more to soccer and to Gaelic football from his father’s native country.

During a winter-break conversation in the Mahwah, N.J., house in which he grew up, Murray recalled the nearby playing fields, where his father, Aidan Sr., helped hone his kicking.

“That’s where we spent hours upon hours every day,” he said of his neighborhood friends and his brother, Aidan Jr., who aspires to follow in Patrick’s footsteps at Rutgers University. “That’s where we grew up.”

Murray thought he would play soccer in high school, until a family friend suggested he had the skills to succeed as a football kicker.

“It turned out to be the best decision we could have made,” he said.

The next year, while considering where to attend college, he ambled onto the Rose Hill campus, where the football team was practicing, and introduced himself to then-head coach Tom Masella.

“We know who you are,” Murray recalled Masella telling him a few minutes later. “Show up tomorrow. We’ll get you in the school.”

Already the team’s outstanding punter, he took over the place-kicking duties full-time in 2012.

Murray made 25 of 30 field goals, including four of six from 50 or more yards. His punts averaged 46 yards, more than eight yards longer than the opposition’s average.

Murray is thinking about attending law school, but might have to defer his lawyerly ambitions: his coaches have told him that just about every National Football League team has inquired about him.

Although the finer points of finance occupy much of his time, so does preparation for Pro Day, in March, when several NFL scouts will come to Fordham to watch Murray go through his paces. The draft follows, at the end of April.
“I just have to stay focused,” he said. “I know I’ll get my shot.” 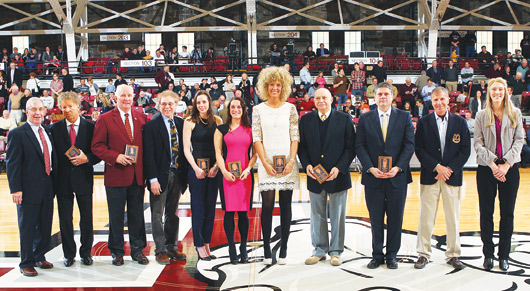 HALL OF FAME: On Jan. 26, Fordham University inducted some of the greatest athletes in University history into its Athletics Hall of Fame. The athletes were recognized at a halftime celebration during the Fordham Rams game against Rhode Island.