On Jan. 29, more than 250 Fordham student-athletes attended the Student-Athlete Career Mentoring Night in the McGinley Center Ballroom, sponsored by the Athletic Department, with help from the Student Athlete Advisory Council (SAAC) and the Office of Development and University Relations. Those in attendance received guidance and support from six Fordham graduates who have gone on to find success in their chosen fields. 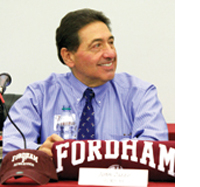 John Zizzo, FCRH ’69, tells
students what is most important
in a career: “You can go a long
way with honesty and integrity,”
he said.
Photo by Cynthia O’Connor