skip to main content
Return to Fordham University
You are at:Home»Athletics»Patrick Ewing Receives Inaugural Bach Award
The Fordham University Basketball Tip-Off Dinner was made even more special this year with the addition of the inaugural Johnny Bach Award, which was presented to former New York Knick (and Fordham parent) Patrick Ewing at the Grand Hyatt on Nov. 5.

Ewing, an 11-time NBA All-Star, was on hand to accept the award. Also attending the event was Bach himself, who received a standing ovation.

A Fordham legend, John W. Bach, FCRH ‘48, enjoyed a career as a coaching icon on the collegiate, professional, and international levels. He is still holds the most winning record in Fordham University basketball history, having led the Rams to five NIT appearances and a pair of NCAA berths in 18 seasons, from 1950 to 1968, before leaving for Penn State.
In accepting the award, Ewing praised Bach’s coaching knowledge, hoping that lessons he learned from Bach when they coached together with the Washington Wizards would someday help him in his coaching endeavors.

“Even though I’m a Hoya, I believe in Johnny Bach so much that I was so honored when he called me to tell me I would get his award,” said Ewing. “I remember just sitting with him and listening to his philosophy. I hope to be able to utilize that when I become a head coach.” 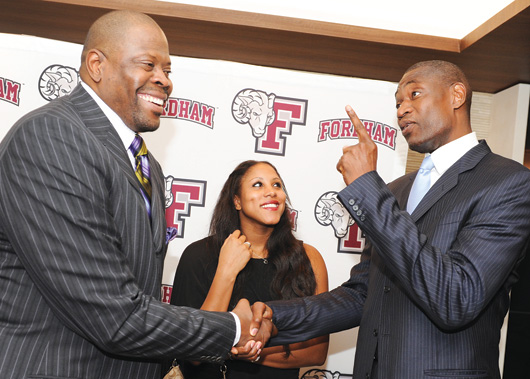