skip to main content
Return to Fordham University
You are at:Home»Athletics»Old-Time Football Powers to Clash Again

Put on your fedora, pour a sloe gin fizz and get yourself to West Point, because Fordham and Army are going to play some football. 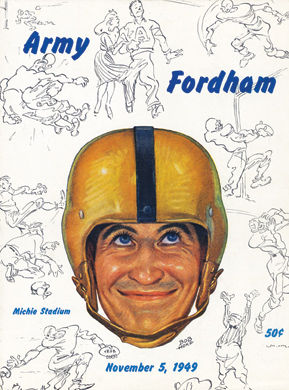 An Army football player is depicted on the program cover for the game between Fordham and West Point in 1949.

Two of the most-storied programs from college football’s “golden age” will meet this season for the first time since 1949.

The contest, which will kick-off at 3:30 p.m. on Saturday, Oct. 29, at Army’s Michie Stadium, has drawn outsized interest from the Rams’ gridiron followers. Although more than one month remains, Fordham has sold more than 350 game tickets from its 600-seat allotment, and more than 260 tickets to the pre-game tailgate.

“We are very excited to be playing at Army this year,” said Fordham head coach Tom Masella. “Both institutions have a rich football history and the game-day atmosphere at West Point is second to none.

“It will be an honor to bring the team into Michie Stadium, where so many Army greats have played,” Masella added. “We are looking forward to the game, and to seeing the Fordham faithful turn out at West Point to support the Rams.”

Both programs were atop the polls during a time when college teams sated the nation’s appetite for bruising gridiron combat.

Powered by a series of rock-ribbed defensive linemen known as the Seven Blocks of Granite, Fordham had six top-20 finishes between 1936 and 1941. The Rams locked horns with leading programs each week and attended the Sugar and Cotton Bowls in the years before World War II.

For their part, the Army Cadets boast three consecutive national championships from 1944 to 1946 and two Heisman Trophy winners during that span.

The histories of both teams intersect with coaching legend Vince Lombardi (FCRH ’37), a member of the Seven Blocks of Granite during the 1936 season.

Lombardi was an assistant coach at Rose Hill in 1947 and 1948 before taking an assistant coaching position at West Point in 1949. His jump from Fordham to Army may explain the tenor of the game played between the two teams that year.

Though both sides entered the contest unbeaten, Army picked off two Maroon passes before halftime, which ultimately sealed Fordham’s fate. But the Rams gave as good as they got on the field. In fact, the game was so hard-fought that sportswriters dubbed it the “Donnybrook on the Hudson.”

Look magazine reported: “The Cadets and the Rams went to work on each other with everything short of stilettos and strangling cords.”

“I was told that 17 teeth came out of nine different mouths. I lost one. I got my whole face pranged when I was blindsided coming off the field after a punt. That was the kind of game it was.”

To celebrate both universities’ ties to Vince Lombardi and historic contributions to college football, the West Point Association of Graduates is hosting a gala for Fordham alumni the night before the game. More than 240 seats made available to the University earlier this summer quickly sold out.