skip to main content
Return to Fordham University
You are at:Home»Athletics»New Honor for Coach Moorhead 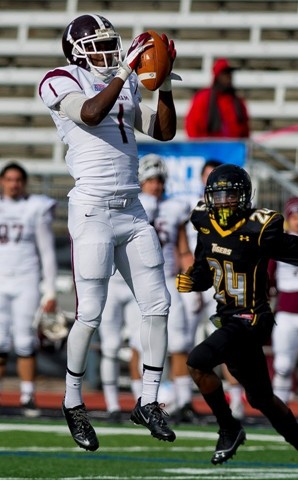 Moorhead, an Eddie Robinson Award finalist as the NCAA FCS Coach of the Year for the past two seasons, led Fordham to a 12-2 record this fall and the Rams advanced to the second round of the NCAA FCS Championship for just the second time in school history.

Moorhead, the 2013 AFCA Regional Co-Coach of the Year, Patriot League Coach of the Year and a Liberty Mutual Coach of the Year finalist, led the Rams to unprecedented success in 2013, winning the first ten games of the year for the first time in school history and being ranked as high as fifth in the NCAA FCS polls, Fordham’s highest ever ranking on the FCS level. The Rams set a school record for most wins in a season in the modern era (since 1920) and accomplished a plethora of firsts, including the first win over an NCAA FBS team (Temple), the first win over a top-ten ranked NCAA FCS team on Jack Coffey Field (Villanova) and the school’s first ever home NCAA FCS championship win on Jack Coffey Field (Sacred Heart). For his accomplishments, Moorhead was named the 2013 Patriot League Coach of the Year.

A former Fordham quarterback, Moorhead and revamped the Rams’ offense, a unit that led the NCAA FCS in pass completion percentage (70.6%), was third in passing offense (360.9 yards/game) and total first downs (364), and seventh in total offense (515.3 yards/game) this fall.
After catching 26 passes for 312 yards over his first two years at Rose Hill, Ajala, who earned All-America honors from the Associated Press, Beyond Sports Network, College Sports Madness and The Sports Network and was also named first team All-Patriot League in 2013, had a coming out party this year, hauling in 93 passes for 1,646 yards, both team highs, with 14 touchdowns, tying for the team lead. He broke Javarus Dudley’s 2003 school record of 1,439 receiving yards in a season and tied Dudley’s school record for receiving touchdowns in a season, also set in 2003. Ajala is second in the NCAA FCS in receiving yards and is second in the Patriot League and fourth in the NCAA FCS in receiving yards per game (117.6). He also ranks among the top 20 nationally in receiving touchdowns (tied for third) and receptions per game (12th).
Over his career, Ajala has 119 receptions for 1,958 yards and 16 touchdowns. He is sixth on the school’s all-time receiving yards list, seventh on the career receptions list and tied for sixth in receiving touchdowns.

Nebrich, a 2013 Beyond Sports Network and College Sports Madness All-American and the 2013 Patriot League Offensive Player of the Year, enjoyed one of the best regular seasons for a quarterback in school history.  He completed 353-of-480 passes (73.5%) for 4,380 yards with 35 touchdowns, and also rushed for 513 yards and nine scores. His completion percentage leads the nation as does his total offense (376.4 yards/game) while he also ranks in the top five nationally in passing yards per game (336.9 – third), passing efficiency (171.3 – second), completions per game (27.15 – third), and points responsible for per contest (20.5 – third). He went 11-0 as the starting quarterback during the regular season in 2013, one of only two FCS signal-callers to put up an undefeated mark for the season. He set every school single season passing record this fall, eclipsing John Skelton’s 2009 record of 284 completions for 3,708 yards and Mark Carney’s 2001 mark of 27 passing touchdowns. Nebrich also set a Fordham record with 524 passing yards in a win against Holy Cross on Nov. 2.

Over his career, Light has 134 receptions, a school record for tight ends, for 1,209 yards, second best among all tight ends in Fordham history, and three touchdowns.