skip to main content
Return to Fordham University
You are at:Home»Athletics»Mental Health and Wellness Give Student-Athletes a Competitive Edge 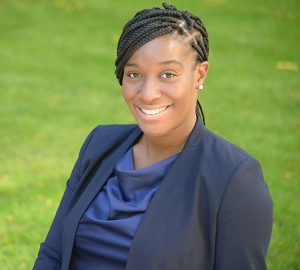 From tennis star Naomi Osaka’s willingness to say “it’s OK to not be OK” to the panic attack-prone title character of the T.V. show Ted Lasso, mental health in sports seems to be having its moment. But the professionalization of wellness in sports is still evolving and involves far more than having a psychologist on staff.  It’s about coordinating every aspect of a student-athlete’s well-being, psychologically, physically, emotionally and spiritually, said Djenane Paul.

In September, Paul was promoted to become Fordham’s Deputy Athletic Director for Student-Athlete Welfare and Competitive Excellence. She’s been working since 2016 to bring together the many parts of student-athlete wellness, including nutrition, sports medicine, strength and conditioning, and behavioral health. Her efforts have created an infrastructure on which a full-fledged student-athlete mental health program at Fordham could grow.

“Part of the goal was to normalize mental health and to build [the program]from a place where student-athlete wellness is rooted in cura personalis,” said Paul. “If we believe that we need to care for the whole unique individual, then we needed it to be consistent with every aspect of a student-athlete’s education, including athletics.”

According to an August 2021 statement on mental health challenges for athletes from the American College of Sports Medicine, approximately 30% of women and 25% of men who are student-athletes report having anxiety, and only 10% of all college athletes with known mental health conditions seek care from a mental health professional. Fortunately, Fordham Athletics had been building its wellness program well before the pandemic exacerbated the issue, said Paul.

Fordham Athletic Director Ed Kull said many aspects of health—including mental health, wellness, and nutrition—are top priorities for Fordham athletics under the University’s $350 million fundraising campaign, Cura Personalis | For Every Fordham Student, which seeks to reinvest in all aspects of the student experience. Other priorities include support for students’ academic efforts and personal, leadership, and career development.

“Our Rams are high-achieving individuals and we are continually identifying new ways to care for their whole person–both in and out of competition,” Kull said.

The anonymous survey asked student-athletes if they or their teammates have ever struggled with mental health, whether they would consider seeing a sports psychologist, and whether they wanted the department to have a therapist on staff. Paul said that she was not surprised to learn that student-athletes were not only open to discussing mental health, but they were also open to seeing a mental health professional. The survey spurred Canessa to work with teammates and Paul to form T.E.A.M. Fordham (Together Everyone Achieves More), which seeks to help student-athletes mentally prepare for their post-athletic careers.

“I personally saw teammates struggle and I thought it would make a huge difference if all athletes could help each other,” said Canessa, adding that her peers didn’t view seeing a therapist as a weakness.

Canessa said that for most student-athletes, graduation often means breaking away from a life-long passion which is the very reason that T.E.A.M Fordham was created—to ensure that student-athletes were prepared for their life after Fordham.

“The majority of us would not become professional athletes once we graduated, so we wanted to make sure that once college was over we didn’t have an identity crisis,” said Canessa.

In 2020, as one athletic season after another was canceled due to the pandemic and discussions around social unrest continued, student-athletes once again pulled together with Paul and Associate Athletic Director for Compliance and Student-Athlete Development Jamilah Ali-Shaffer. With their advisers, along with the Fordham Athletics Social Justice Task Force, they formed a student-athlete-led group called Fordham Connect. Its mission is to create a safe space where student-athletes can engage in open conversations about issues affecting them and foster a healthier environment within Fordham Athletics.  While T.E.A.M. Fordham honed its focus on helping student-athletes prepare for a post-academic life and developing the whole person, the Fordham Connect aims to erase the stigma around vulnerability and mental health in sports. 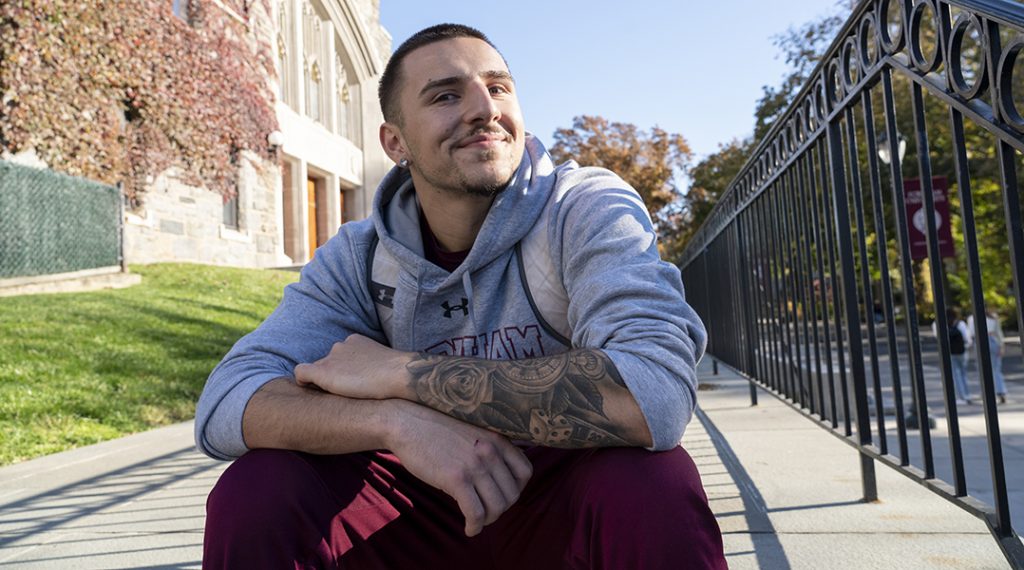 Fordham College at Rose Hill junior Jeff Ciccio plays tight end on the football team. “Not everyone is going to be as physically strong as the next guy in the weight room, so it all comes down to mental,” he said.

But back in 2017, Paul was still just getting the ball rolling. She took the survey findings to then-Athletic Director David Roach, who backed her plan to further explore formalizing a mental health and wellness program. It’s a position Kull continues to prioritize and support.

At the time Roach was athletic director, the NCAA distributed a one-time grant to assist college athletic departments in promoting health and well-being. The monies were allocated toward mental health and sports psychology, allowing the athletic department to retain SportsStrata as consultants for six years. The funding is now in its fifth year.

Fortuitously, Paul was then approached by Lauren Shute, GSS ’20. Shute, a former student-athlete and sports journalist, was getting her Master of Social Work degree at Fordham. She was interested in the intersection of sports wellness and social work, a field that’s still developing. She asked Paul if she could do her required field placement at Fordham Athletics to help design a program that includes a social worker.

Shute said social workers are trained at helping clients navigate the many existing services already available to them.

“With college athletics, you’re communicating with a lot of systems: a strength and conditioning coach, a dietitian, an academic coach, psychological services, professors,” she said.

She added that coordinating care also must factor in a student-athlete’s background and home life alongside the “macro level factors,” something that social workers are trained to do.

One way to introduce student-athletes to various services, Shute said, is to bring all the players and support staff together to discuss a particular topic, such as body image. Shute and Paul did just that in 2019.

“We facilitated the discussion and teammates did open up,” she said.

It was the first of many discussions organized with coaches, team members, a nurse practitioner from Health Services, the institution’s dietitian, and a psychologist from Counseling and Psychological Services. Other topics included were anxiety, depression, family discord, and transitioning out of sport.

With every new partnership that Paul fosters, she makes sure that it’s not a one-shot deal. She accepted Shute as an intern provided the GSS partnership continued after she graduated. This year another GSS student was assigned a field placement in Athletics, the second since Shute’s placement. By the end of Shute’s tenure the discussion groups succeeded in getting the word out that a social worker was on hand to help. Coaches and teammates now regularly refer athletes to them.

“My experience was fantastic and what was interesting to me is that a lot of the kids at Fordham are not looking for a career in sports; they’re really there to get an education, they were so trusting and so open and willing to talk about different issues and that’s why the program works so well,” said Shute

In addition to the GSS field placements, Paul helped foster other new partnerships that will continue into the foreseeable future, including partnerships with Boston University, which has sent several sports psychologist interns to Fordham and the consulting partnership with SportStrata has grown to include a contracted mental performance coach who is a licensed mental health counselor.

Coaches at the Center

Paul said aspects of her new role aren’t really all that new. Rather it’s a formalization of support structure that already existed organically.

“We wanted to make sure there was a reporting structure for the coaches and that they were aware of all of the mental health resources available to their student-athletes,” she said. “We then make sure that psychological services, health services, and sports medicine get involved, but the first line of defense will always be the coaches.”

An impromptu interview with a member of the football team on the Rose Hill Gymnasium steps confirmed as much. Fordham College at Rose Hill junior Jeff Ciccio plays tight end on the football team. He said that if he has an issue, he has no problem going to Head Coach Joe Conlin because the coach talks about mental health in team meetings.

“He is very strong with that and likes to talk about it in team meetings and lets us know that he’s always there for us,” said Ciccio. “And another one of my coaches helps me a lot, he likes to check in on me because I’ve gone through some stuff early in my life and he went through something very similar to what I went through.”

“The most important thing to remember when serving the athletic community is that these student-athletes are people first and you have to treat the person before the ‘athlete,’” said Gluck. “It’s really easy to think that because they are athletes their problems will be vastly different than other students but that is just not the case.”

However, one key difference is that student-athletes are working two full-time jobs as Fordham students and as athletes, she said. She added that in treatment it’s important to consider team dynamics and what their coaches expect from them.

Fordham coaches believe that having strong mental health is part of the strategy for success, said Paul.

For his part, Ciccio credits Coach Conlin as “the best coach around to keep us mentally strong.”

“We’re only as strong as our weakest link. We got to make sure that everyone is as mentally strong as each other, because not everyone is going to be as physically strong as the next guy in the weight room, so it all comes down to mental. And I think here at Fordham we are very strong mentally.”

To inquire about supporting athletics or another area of the University, please contact Michael Boyd, senior associate vice president for development and university relations, at 212-636-6525 or mboyd7@fordham.edu. Learn more about Cura Personalis | For Every Fordham Student, our campaign to reinvest in every aspect of the Fordham student experience.

For more information on giving in support of Fordham athletics, contact Kara Field at kfield1@fordham.edu. Learn more about Cura Personalis | For Every Fordham Student, a $350 million fundraising campaign to reinvest in all  aspect of the Fordham experience.