skip to main content
Return to Fordham University
You are at:Home»Athletics»Men’s Basketball Beats Ranked Foe at Home for First Time Since 1978 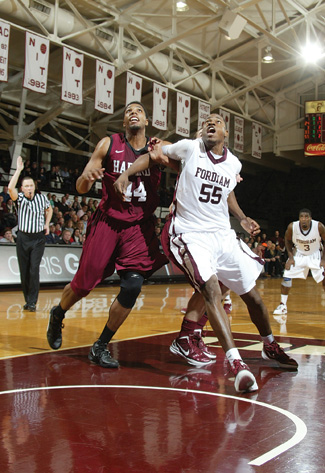 Senior Kervin Bristol boxes out a Harvard player in anticipation of a rebound.
Photo by Vincent Dusovic

Jimmy Carter was president. Gas was 67 cents a gallon. Andy Gibb’s “(Love Is) Thicker Than Water” was the No. 1 record.

What do these things have in common?

They were true the last time the Fordham men’s basketball team beat an Associated Press-ranked opponent in the Rose Hill Gym.

But that all changed on Jan. 3 as the Rams upended Harvard by a score of 60-54 in front of a boisterous home crowd.

Fordham last beat a ranked foe away
from Rose Hill in 2000, when the Rams defeated the St. John’s Red Storm at
Madison Square Garden.

The Harvard win, Fordham’s fourth over its previous five games, advanced the team’s record to 7-6. Harvard, which entered the game No. 22 in the Associated Press poll and No. 21 in the ESPN/USA Today Coaches poll, fell to 12-2.

“I’m really happy with how hard we played,” Fordham head coach Tom Pecora said. “There was a stretch in the second half where Harvard started to play a little harder, but we called a time out and we regrouped. And Chris [Gaston] did a great job playing within himself, making veteran plays.”

With a young team comprised of seven freshmen and four sophomores, the Rams were looking for veteran leadership. Gaston, a junior, responded by notching his sixth straight double-double and his NCAA-leading 11th of the year. He finished with 18 points and 10 rebounds, shooting 8-for-15 from
the field.

When asked to explain the difference in his scoring output between the first half (four points, four rebounds) and the second half (14 points, six rebounds), Gaston replied simply, “It was the shoes.” He said that he changed his shoes at halftime because the pair he wore in the first half were hurting his feet.

Gaston wasn’t the only veteran leader that night. Senior center Kervin Bristol added seven rebounds and two blocks while senior guard Alberto Estwick nailed an early three-pointer to help the Rams keep up with the Crimson.

Youth was also on display for the Rams as freshman Bryan Smith led all scorers with 22 points, shooting five-of-eight from behind the three-point line including a big three with 15 seconds left. Sophomore guard Branden Frazier tied his career-high with eight assists.

“I encourage Bryan to shoot the ball,” Pecora said. “He passes up shots. At times, I don’t think he realizes how good a shooter he is.”