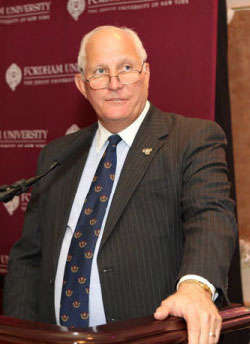 Fordham University Executive Director of Athletics Frank McLaughlin will be promoted to the new position of associate vice president of student affairs for athletic alumni relations and external affairs/athletic director emeritus at the University on July 1, 2012, it was announced today.

The University has also announced a national search to fill the position of athletic director, held by McLaughlin for 27 years.

In his new position, McLaughlin’s responsibilities will include providing leadership for institutional efforts focused on athletic alumni relations, fundraising and external athletic affairs as well as supporting the overall University fundraising and campaign efforts with a special focus on intercollegiate athletics. He will also work closely with varsity coaches and athletic department staff in identifying fundraising needs and opportunities for individual programs, and advancing efforts in support of same.

“I am grateful, and humbled, by all the opportunities Fordham has given me, including this latest one,” McLaughlin said. “It has been an honor to lead the University’s athletic program, and I’m excited to step into this new role while continuing to mentor student athletes.”

The University is assembling a search committee for the athletic director position, and will pursue highly qualified candidates from across the country, with the goal of filling the position during the fall semester.

“The athletic program has expanded significantly and become a professional operation on Frank’s watch,” Senior Vice President for Student Affairs Jeffrey L. Gray said. “I admire him personally and professionally. He is an outstanding husband and father, and the many achievements we’ve made in athletics are due to his strong leadership and good judgment. I look forward to working with Frank in his new capacity, where he will continue to serve the University and the athletic department in advancing our important mission.”

Under McLaughlin’s tenure, the Fordham athletic department has experienced numerous changes. Among those has been the recent renovation of the Bahoshy Softball Field, a new football locker room, new basketball locker rooms and renovations to Jack Coffey Field and the Murphy Field complex.  Both fields have been resurfaced with state of the art FieldTurf, with Coffey Field adding lights, a baseball press box and a new scoreboard. Murphy Field, a multi-purpose athletic facility, added tennis courts, a softball field, and a soccer, football and recreational field, all lighted.  Under McLaughlin’s watch, the athletic department constructed the Walsh Training Center, the first varsity training center at Fordham dedicated exclusively to student-athletes.

During McLaughlin’s time as athletic director, the Rams experienced success both on and off the playing fields. Since 1985, Fordham has won 26 conference championships, including the 2011 Atlantic 10 softball title last spring, the 2010 Atlantic 10 Women’s Swimming Championship, and two Patriot League football championships.

Academically, Fordham annually ranks among the leaders in the number of student-athletes named to the Atlantic 10 Commissioner’s Honor Roll and has routinely been among the national leaders in NCAA Academic Progress Rates, ranking 18th in the country in 2011.

A 1969 Fordham graduate and standout basketball student-athlete, McLaughlin captained the Rams during his senior season and was drafted by the New York Knicks following graduation.  He went on to become an assistant coach at the College of the Holy Cross and after a season there returned to Fordham as an assistant under Richard “Digger” Phelps in 1970-1971, helping the Rams to a 26-3 record (.897) and an NCAA Tournament appearance.  Fordham finished the season with a ranking of ninth in the nation.

McLaughlin moved to Notre Dame with Phelps the following year where he was a major part of the Fighting Irish’s program through his outstanding recruiting and academic guidance.  He helped the Irish to consistent national rankings and NCAA Tournament bids.

In 1977, McLaughlin was named the head coach at Harvard University, where he remained for eight years.  In his final season he compiled a 15-9 mark, and currently ranks fourth in both seasons and wins in Crimson history.