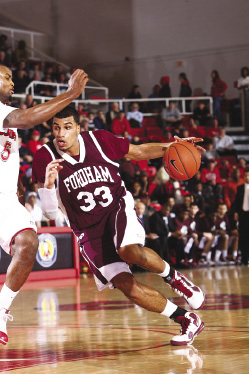 Chris Gaston will lead the Rams as they open the 2011-2012 season at 4 p.m. on Nov. 12 against the Syracuse Orange in Syracuse, N.Y.
Photo by Vincent Dusovic

Junior forward Chris Gaston has been named Second Team Preseason All-Atlantic 10 (A-10) by the conference coaches and media members.

The announcement occurred during A-10 Media Day on Oct. 13 at the New York Marriott at the Brooklyn Bridge. This marks the second straight season that Gaston has been so honored.

Gaston led the Rams last year in scoring and rebounding for the second straight year, averaging 15.9 points per game and 11.3 rebounds per game.

He also recorded 41 blocks, 38 assists and a team-high 26 steals. Gaston led the A-10 in rebounding for the second consecutive season, and in defensive rebounding with 7.9 rebounds per game. He ranked ninth in the conference in scoring, seventh in blocked shots and third in offensive rebounding.

“We really leaned on Chris Gaston last year, and that took a physical toll on him,” said Fordham head coach Tom Pecora. “I told him that this year I expect the same numbers from him, but he will have to be more efficient as we will be cutting down on his minutes to keep him fresh.”

At Media Day, Pecora fielded questions from print and electronic journalists and taped commercials for CBS Sports and the A-10.

A constant question for Pecora was how he will handle such a young team—one with seven newcomers.

“Even though we’re young this year we’ll have better depth than last year,” Pecora said. “Last year we only played five or six guys, and by the end of the year they were exhausted. But this year we can go with nine or 10 guys.

“Even though we have a lot of young players who will make mistakes, they’ll learn from those mistakes, which will make them better players as juniors and seniors,” he said.

Pecora was asked about his style of play, which emphasizes the guards.

“I’ve always played a three-guard system,” he said. “But to do that, you need tough players who are not afraid of being outsized, and I think we have that type of player. In college basketball, the guards dictate tempo and control the game, so to be successful you need solid play from your guards.”