skip to main content
Return to Fordham University
You are at:Home»Athletics»Gaitley Takes Lady Rams on a Roll

Last summer, Stephanie Gaitley peered at the season schedule for the University’s women’s basketball team and made some calculations. Working the percentages, she concluded that her Rams just might embark on the team’s first winning campaign in 19 years.

“I felt we could be successful,” she said. “I thought it would be 18 wins.” Gaitley, the team’s second-year coach, was off. By a lot.

The team came within two points of a NCAA tourney berth, losing in the final of the A-10 tournament. The team instead slotted into the National Invitation Tournament and made it to the Sweet 16.

Gaitley, who arrived at Fordham in May 2011, had transformed the team from a conference punching bag into a contender.

She acknowledges her basketball acumen—“I know angles and I’m smart,” she said. But Gaitley insists that winning teams share a more amorphous quality than tactics.

“It’s not a magical formula about offense/defense,” she said.

Instead, she works on conjuring relationships, especially among players, and cultivating a culture of respect.

“It’s all intertwined,” she said.

Gaitley arrived at Fordham after compiling remarkable records coaching at Monmouth University, Long Island University, St. Joseph’s University and the University of Richmond. She is the winningest coach at three of them—Richmond, LIU and St. Joe’s. 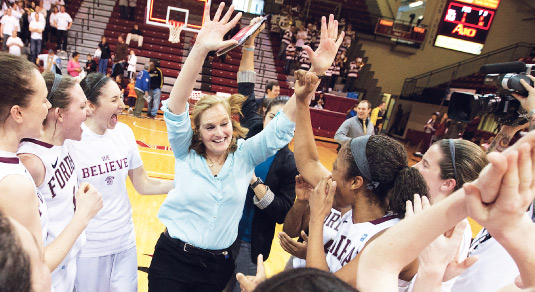 Stephanie Gaitley, women’s basketball coach, gets enthusiastic with her team at a playoff game held this spring. The Lady Rams had the best basketball season in more than 30 years. .
Photo by Mitchell Leff

She grew up in Ocean City, N.J., the sixth of eight children of parents who were both good athletes. Athleticism, she said, “was ingrained in us early. It just carried over.”

Gaitley played both softball and basketball in her youth. Her passion, though, was already basketball by the time she was in high school.

Her Ocean City High School squad went undefeated in her time there, winning an even 100 games. Six of that team’s players earned Division I scholarships, including Gaitley, who went on to star at Villanova, where she earned a bachelor’s degree in education and was an academic All-American in her senior year.

Knowing she wanted to coach, she studied the game’s tactical aspects and worked as an assistant coach at St. Joe’s after graduation. She landed the head coaching job at the University of Richmond when she was in her mid-20s.

If she was mostly a talker then, she said, she’s a listener now, which she attributes to having raised a family.

“I think being a mom really helps me as a coach,” she said, noting that it helped her to see her role as a “nurturer.”

“You’re mine for life; you’re not just mine for four years,” she said of her players.

Gaitley initially had reservations about taking the coaching post. But the challenge, coupled with the University’s Jesuit foundation and philosophy, ultimately prevailed.

“I always felt Fordham was a little jewel,” she said. “I needed to be somewhere that I would choose as a player.”

Gaitley’s middle son, DC, came to Fordham along with her and made the men’s squad as a freshman walk-on. Jordan, her youngest son, will begin at Fordham Prep in the fall.

The 2013-14 season starts Nov. 8. Between now and then, Gaitley will run a coaching clinic and then take her team to Australia, New Zealand, and Fiji, where the squad will play several games over 10 days.

“It’s a great opportunity to get know each other and to bond,” she said.

Gaitley will also have a look at the team’s schedule, and then, as she did last year, do some calculations. But figuring out the win-loss probabilities will take more nuance this time around, for one simple reason: “Now we’re no longer a surprise,” she said.

Success, though, has a built-in and equally straightforward formula for winning. “The kids have had a taste of it,” Gaitley said. “They don’t want to lose it.”