skip to main content
Return to Fordham University
You are at:Home»Athletics»Former Fordham Baseball Coach Elected to the ABCA Hall of Fame

Former Fordham baseball coach Dan Gallagher, who coached for more than 20 years at Rose Hill and recorded more than 500 wins, will be inducted into the American Baseball Coaches Association (ABCA) 2013 Hall of Fame. 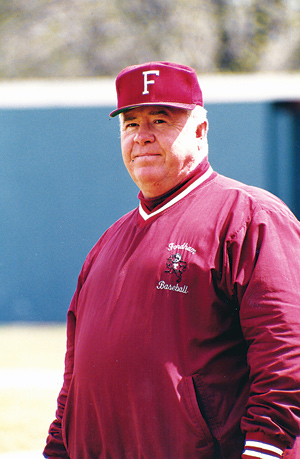 Gallagher becomes the second ABCA Hall of Famer with Fordham ties. Jack Coffey, one of the founders of the ABCA and long-time Fordham baseball coach, is also a member, having been inducted in the inaugural class of 1966.

“It was the greatest feeling to hear about this,” said Gallagher. “It’s the best feeling in the world. You’re elected by your peers, and that’s such a great honor in itself.”

In 21 seasons, Gallagher posted a 518-468-10 record, good for second place on the school’s all-time list. Gallagher’s 500-plus wins make Fordham one of very few programs to have two coaches with 500 wins or better (Coffey had more than 1,000 wins).

Under Gallagher’s guidance, a number of Fordham players have gone on to be drafted by Major League Baseball teams, or sign free agent contracts. These include Pete Harnisch, who was a first round draft choice of the Baltimore Orioles; Mike Marchiano, who was a 1997 All-American and a draft pick of the Seattle Mariners; and Bobby Kingsbury, a two-time Atlantic 10 Player of the Year who was drafted by the Pittsburgh Pirates.

“These kids worked hard on and off the field,” he said. “So many kids have come back to tell me that the discipline and work habits have shaped them as men. It’s been a home run for me.”

Formerly a construction worker and then a high school baseball coach, Gallagher arrived at Rose Hill in 1984, and rebuilt a program in disarray, snaring some of the most highly regarded players out of high school.

In 2007, Gallagher was inducted into the Fordham Athletics Hall of Fame.