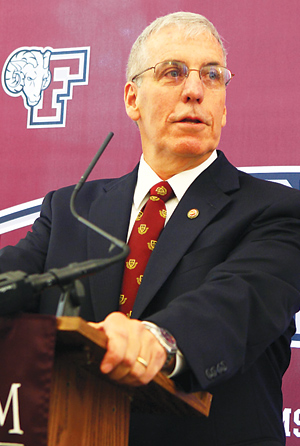 After an extensive national search, Fordham University announced on Sept. 26 the appointment of David T. Roach as the new director of intercollegiate athletics and recreation.

Roach, who saw 75 of his teams win league championships in 22 years as an athletic director, and who served as the president of the National Association of Collegiate Athletic Directors in 2010-2011, began his tenure on Oct. 15.

“In David Roach, we have found an athletic director with a demonstrated ability to inspire the best performances from his student-athletes, both on the field and in the classroom,” said Joseph M. McShane, S.J., president of Fordham. “David’s approach—giving equal weight to athletics and scholarship—makes him an ideal fit for Fordham. We are confident that our student-athletes will benefit greatly under his leadership.”

“I’m extremely excited about joining the Fordham University family,” said Roach. “I have always admired Fordham’s educational mission and the role that intercollegiate athletics plays in accomplishing that mission. I’m honored and humbled to have been selected.”

Roach arrived at Fordham after eight years as the director of athletics at Colgate University, where he managed the university’s programs in physical education, recreation, and competitive athletics for 25 Division I men’s and women’s teams, as well as intramural and club sports.

While at Colgate, Roach coordinated the development of a new athletic brand and mascot; enhanced Colgate’s scoreboards and the overall look of its athletic venues; started the Raider Academic Honor Roll for academic accomplishments; increased ticket sales for football, hockey, basketball, and lacrosse; increased revenue from corporate sponsorships from $18,000 to more than $200,000 per year; and signed an agreement to televise selected athletic events.

Roach has also been very active in shaping the landscape of intercollegiate athletics, currently serving on the board of directors and as treasurer of the Black Coaches and Administrators (BCA) organization. He has served as president of the National Association of Collegiate Directors of Athletics (NACDA) in 2010-2011.

Prior to serving at Colgate, Roach served as the director of athletics at Brown University for 14 years. In 2002, Brown’s athletics program was honored by U.S. News & World Report as one of the top 20 athletics programs in the nation.

At both schools, Roach instituted a program whereby each varsity team adopted a local school. The student-athletes mentor the students at the school, helping guide them academically and helping the classroom teacher achieve the set goals for the school year.

Roach served as head swimming coach at the University of Tennessee from 1986-1990 and at Brown from 1978-1986. As the head coach at Brown, Roach guided the Bruins to a 74-6-1 dual meet record, three Ivy League team championships and two Eastern team titles.

A native of Waterbury, Conn., Roach received his bachelor’s degree from Springfield College in 1971, and earned a master’s of science degree in physical education from the school in 1972. He was a member of the Springfield College men’s varsity swimming team that won three consecutive New England Conference championships, serving as the team’s co-captain in 1971.

Roach and his wife, Anne, have three daughters, Elizabeth, Michelle and Alexandra.