skip to main content
Return to Fordham University
You are at:Home»Athletics»Fordham vs. Holy Cross: A Grandfather’s Balancing Act
Above, Barbara and Jim Baisley showed their support for each team (and each grandson) at last year’s Ram-Crusader game. The two teams face off again at Yankee Stadium on Nov. 12.
Jim Baisley, FCRH ‘54 LAW ‘61, has long cheered for Fordham’s football team, going back to the days when he’d watch them play in the Polo Grounds, then the home of baseball’s New York Giants.

Baisley, 83, remembers how, after moving from New York to Chicago in the late 60s, he’d even try to win over Midwesterners by mentioning that he knew Vince Lombardi, FCRH ‘37, the legendary Green Bay Packers coach (who during his time at Fordham tried unsuccessfully to convince Jim’s brother, a basketball player, to join the football team).

But when Fordham takes on Holy Cross for the Ram-Crusader Cup in a highly anticipated game at Yankee Stadium on Nov. 12, Baisley won’t be pulling for either team. 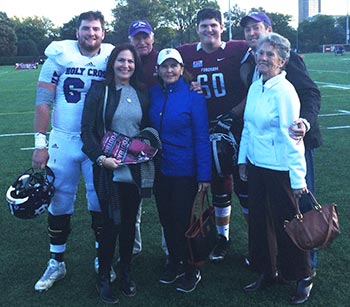 “Oh, it’s going to be absolutely wonderful,” says Baisley, who retired as general counsel for W.W. Grainger in 2000. “We used to go to all the Yankee baseball games. And so to have your grandkids playing in the game, it’s rewarding. You work hard and you try to educate your kids, and give them an opportunity to be good people. And I think they’re all good people.”

Baisley says he’s seen his grandsons, who were teammates in high school in Illinois, play against each other just once: Fordham’s 47-41 overtime win over Holy Cross last season. But he says it’s a thrill to see them suit up for opposing schools, especially since Charlie and Jimmy are both on their team’s offensive units.

“It might have been different if they were knocking heads against each other,” he says. “But that wasn’t happening.”

“I’m really excited,” says Jimmy Murray. “This game has been on everyone in my family’s schedule for the last two years.” Indeed, Baisley says at least 50 family members will be on hand on Nov. 12.

Not surprisingly, his grandsons are trying to sway him to their schools’ side.

“I’ve been kind of leaving some Holy Cross gear around his house, and hoping that he picks up on the hints and is wearing more Holy Cross than Fordham,” says Jimmy Murray.

Charlie, meanwhile, plans to try and persuade his grandfather to pull for his alma mater. “I hope he ultimately roots for Fordham, but I’m sure he’s going to have a great time regardless of the score of the game,” he said.

But despite his family’s many Fordham connections—another grandson played golf at Fordham, and he has a granddaughter in high school who’s committed to play soccer for the Rams in 2017—Baisley says he’s not rooting for either team at Yankee Stadium.

To remain neutral on game day, he says “I may bring my Holy Cross hat and my Fordham hat, and wear them interchangeably.”

“I don’t care which team wins,” he says. “I think every kid on that field is a winner because they’re getting a Jesuit education.”