skip to main content
Return to Fordham University
You are at:Home»Athletics»Fordham Senior Garners Several Awards
Fordham University senior kicker Patrick Murray added more awards to his cache in December as he became the 2012 recipient of the prestigious Fred Mitchell Award on Dec. 11, was named a First Team 2012 Associated Press NCAA FCS All-American placekicker on Dec. 12, was named Placekicker of the Year on Dec. 18 by the College Board Performance Awards, and was awarded the NCAA FCS Academic All-Star award on Jan. 12.

The senior football punter has received eleven awards during the 2012 football season, and is the first Football Championship Subdivision kicker to receive the Mitchell award. It is the second straight year Murray has been honored by the Associated Press, earning Third Team honors as a punter last year.

Off the field, Murray has been active in community service projects with the football team, volunteering for a program through which players read to elementary school children in the Bronx. He is also active with the Part of the Solution (POTS) program, working at local food shelters. 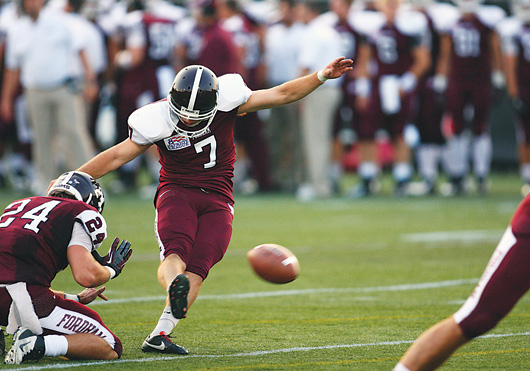