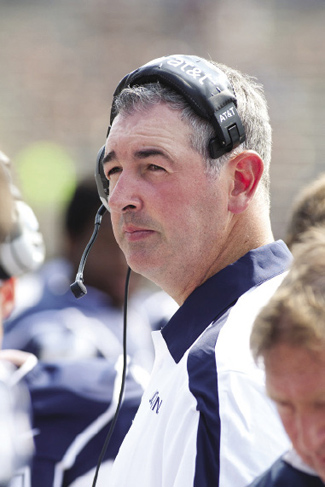 Joe Moorhead (FCRH ’96) is the fourth alumnus to serve as head football coach at Fordham since 1920.
Photo courtesy of Fordham Athletics

Joe Moorhead (FCRH ’96) has been named the new head football coach at Fordham.

A three-year starting quarterback for the Rams in the 1990s, Moorhead signed a multi-year agreement to lead the team. He becomes the fourth alumnus since 1920 to serve in that capacity and the first since Jim Lansing (FCRH ’43), who coached from 1966 to 1971.

“We are very pleased to bring Joe Moorhead back to Fordham as head coach,” said Joseph M. McShane, S.J., president of Fordham. “As an alumnus of the University and its football program, he understands and embodies the values of a Jesuit education. His experience and leadership will bring new energy to the Rams, on and off the field.”

Moorhead arrives at Fordham with 14 years of collegiate coaching experience, most recently as the offensive coordinator and quarterbacks coach at the University of Connecticut, where he coached for the past three years. He served as the Huskies’ offensive coordinator in 2009 and 2010, leading a unit that was second in the Big East in scoring offense and rushing offense in 2010.

That season, the Huskies won the conference title and appeared in the Fiesta Bowl against Oklahoma. After the season, UConn running back Jordan Todman was named Second Team All-America and Big East Offensive Player of the Year.

Moorhead was as an assistant coach from 2004 to 2008 at the University of Akron, where he served as offensive coordinator during his final two seasons. In 2008, Akron was one of 17 teams to be ranked among the top 50 nationally in rushing offense, passing offense, total offense and scoring offense. In 2006, Moorhead was the Zips’ passing game coordinator and quarterbacks coach. In that role, he mentored Luke Getsy, who left Akron with 24 school records.

As a collegiate performer, Moorhead was a three-year starter at quarterback and was a team captain as a senior. He made the Patriot League’s Second Team as a senior, finishing 13th nationally in total offense, and graduated with school single-season records for completions and passing yards.

“We are excited to find a coach of Joe Moorhead’s caliber to lead our football program,” said Executive Director of Intercollegiate Athletics Frank McLaughlin. “Not only does he have a wealth of coaching experience, but he is a Fordham man and has a great understanding of what it’s like to play for a tradition-rich program. We are extremely confident that Joe will take the program to the next level in the NCAA Football Championship Subdivision.”