skip to main content
Return to Fordham University
You are at:Home»Athletics»Fordham Honors Eight Hall of Famers . . . and Sports’ Most Famous Trophy 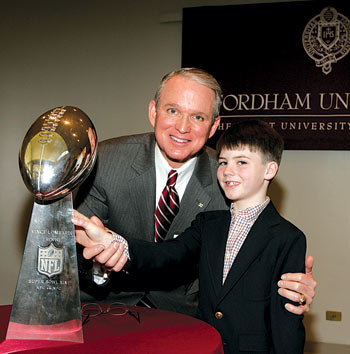 The ranks of Fordham University Athletic Hall of Famers grew by eight on Saturday, Feb. 25th, as the Rams inducted the newest class at the annual Hall of Fame Awards Brunch, held in the McGinley Center on the Rose Hill campus.

The new inductees joined the likes of such Fordham notables as Vince Lombardi, Vin Scully, Wellington Mara and Peter Harnisch.

Master of Ceremony Michael Kay, FCRH ’82 introduced each new Hall of Famer, who then received their Hall of Fame plaque from Joseph M. McShane, S.J., president of Fordham, and Frank McLaughlin, FCRH ’69, executive director of athletics.

The new inductees are:

• Bob Cole, GSB ’78 – Baseball. Cole was a four-year pitcher for the Rams who left his mark on the Fordham record book.

• Bob Conney, FCRH ’29 – Baseball. The late Cooney was a mainstay with the Fordham baseball nine in the 1920s.

• Kate Davis Barrick, FCRH ’06 – SOFTBALL. Davis Barrick was the driving force behind the ascension of Fordham softball to national prominence, helping the Rams to their first-ever regular season Atlantic 10 title.

• Erika Newell, FCRH ’05 – SWIMMING. Newell, who transferred to Fordham for her sophomore year, rewrote the women’s record book in each of her three years at Rose Hill.

• Dan Wolleben, FCRH ’04 – ROWING. Wolleben was a mainstay with the men’s rowing program, winning a national championship all four years at Rose Hill.

Following the ceremony, inductee Cole spoke on behalf of the group, relaying anecdotes from the other Hall of Famers that highlighted the theme of friendship and thankfulness.

“[Our] one common bond is the great experiences [we’ve] had at Fordham,” said Cole. “The [inductees]spoke of the lifelong friends they made here and how Fordham prepared them for life after college.

“Another member of this Hall of Fame is famous for saying `Winning isn’t everything; it’s the only thing’,” said Cole. “Today we all consider ourselves winners because of the opportunities a Fordham education afforded us. Although our time at Fordham was relatively short, the impact will last forever.”