skip to main content
Return to Fordham University
You are at:Home»Athletics»Fordham Gents Give Back
Anthony Carter meets with student-athletes.
At the first-ever gathering of Fordham Gents on Feb. 8, a group of African American alumni mentoring student-athletes, Fordham Trustee Darryl Brown, FCRH ’75, GSAS ’81, talked about what his life looked like after his star turn at Fordham Men’s Basketball.

By most accounts, Brown was an exceptional athlete. The Celtics certainly thought so. They drafted him after he graduated from Fordham College Rose Hill in 1975. But things took a turn in Boston.

“I got smacked,” he said of the pro league. “I realized maybe this isn’t for me and thought, ‘I’m not going to keep knocking my head against the door.’”

After two years in the NBA, Brown was offered a coaching position at Fordham and chance to continue his education. He came back and graduated with a master’s in communications from the Graduate School of Arts and Sciences in 1981. He went on to a 30-year career at ABC and retired eight years ago. Brown offered his story not as a cautionary tale, but simply as one experience among many. 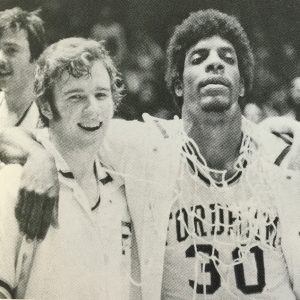 Later the student-athletes broke up into small discussion groups with seven Gents to focus on a particular topic. The group used the same model already employed by the President’s Council’s mentoring program, but with a focus on diversity and inclusiveness. The pilot phase of the initiative will last two years and the group will meet four more times before the end of the year.

“This is a tremendous opportunity for our young people to connect with men who have walked this campus in their shoes and can provide a perspective and leadership and not just for right now, but where they want go forward,” said Football Coach Andrew Breiner.

Anthony Carter, FCRH ’76, who also serves on the Task Force on Diversity and the President’s Council, said that the group’s primary purpose is to “instill confidence and leadership.” He was quick to let the student-athletes know that he and his fellow alumni consider them to be a talented and privileged group. He told the student-athletes that he hopes they will be able to reach out to other students on campus and grow the network.

Neubauer said that it didn’t matter whether a student was a freshman or a senior, they should be able to play an influential role. Carter agreed.

“The one thing the athletes have in common with everyone else on campus is that they are students,” Carter said. “We want to ingrain in them, ‘What do I owe? What’s my payback?’” 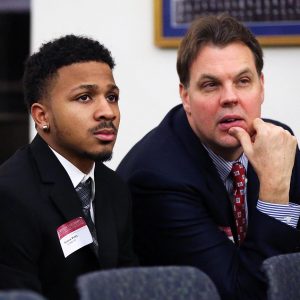 Brenton Petty and Coach Neubauer listen to the Gents.

Carter referred to the “diversity crisis” at universities nationwide and said that while there’s a ways to go, he had never seen a program like Fordham Gents back in the early 1970s.

“It feels complete, but only meaning that we can bring folks together and initiate the responsibility,” he said. “It doesn’t solve the problem. That still needs to be worked through.”

Juan Carlos Matos, director of Multicultural Affairs, said the meeting is a first step in outreach for alumni and young men of color. He added that he hopes the pilot serves as a model to eventually include other identity groups.

For Brenton Petty, a sophomore at Fordham College Rose Hill, the evening provided a great networking opportunity and a bit more.

“Building connections is really key to me, but it’s also great to see guys my skin complexion who want to do great things like me,” said the basketball guard.

Corey Caddle, a freshman at the Gabelli School of Business, said the evening was unique and the timing was good.

“I know there were a few incidents early in the year that we want to get past, that may have put us in a shadow, and may not have felt as comfortable as we did before,” said the wide receiver. “But having something like this is good. It’s good exposure. We meet new people and other African American males just to make that bond tighter.”