skip to main content
Return to Fordham University
You are at:Home»Athletics»Fordham Football Picked to Top Patriot League this Season 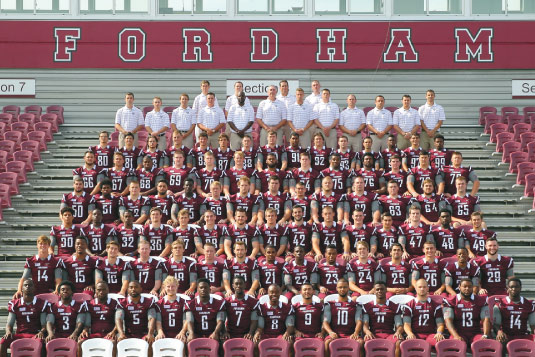 The Fordham Rams are looking to make up for lost time as they were selected as the unanimous choice to win the Patriot League crown in a preseason poll, it was announced at the July 30 Patriot League Football Media Day.

The Rams notched all 12 first-place votes from their opponents to finish with 72 points in the poll. Lehigh University came in second with 54 points, followed by Lafayette University with 51 points.

Fordham comes off a historic 2013-14 season where it finished 12-2 overall, made the second round of the FCS playoffs and placed in the top ten of both national polls.
The Rams homecoming game vs the University of Rhode Island is Sept. 13, 1 p.m.