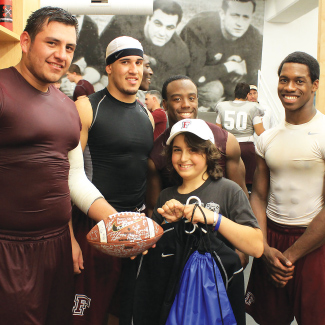 Despite the Fordham football team’s amazing 3-0 start this season, the Rams are always looking for new players. They’ve found one such player in 12-year-old Jonah Shainberg, who was officially adopted by the Rams on Sept. 12 through the Friends of Jaclyn Foundation, an organization supporting children with pediatric brain tumors.

Shainberg and his father, Joshua, attended that day’s practice, where they watched the Rams prepare for their Sept. 14 game with Temple University in Philadelphia. At the end of practice, head coach Joe Moorhead called Jonah out to midfield to meet the team. The squad ran a play in which Jonah took the ball from quarterback Mike Nebrich and raced 60 yards for the touchdown. The team met Jonah in the end zone and carried him to the locker room on their shoulders.

Accompanied by the foundation’s executive director, Michelle DeIeso, and adoption coordinator Katie Johnson, Jonah shared the history of his illness with the team and spoke of how excited he was to be involved with the Rams.

The team’s four captains presented Jonah with his own locker, which was filled with Fordham football gear, T-shirts, sweatshirts, hats, and a football signed by Coach Moorhead and the team.

Coach Moorhead gave Jonah a personal session on how the Rams “break down” film from games, to help coaches instruct on future plays.

Following an interview with News 12 Bronx, Jonah was escorted by the team captains to The Marketplace for dinner in the McGinley Center.

Jonah, a student at The Child School on Randall’s Island, was diagnosed with a brain tumor six years ago and underwent numerous treatments for two years. Although Jonah is cancer-free, he recently suffered a stroke, which left the right side of his body in a weakened state. He is undergoing therapy to regain control of his right side.

“This was a tremendous honor for our team,” said Moorhead. “We are thrilled to be able to add a person like Jonah to our roster. He has been through so much in life and maintains such a positive attitude. We are looking forward to having him with us in meetings and on the sidelines, and will look to him for inspiration as the year goes on.”

The nonprofit Friends of Jaclyn Foundation matches its children with a college or high school sports teams based on geographic location. Jonah is a native New Yorker. 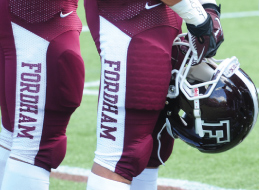 Liberty Cup Game 2013
Click here for a recap of the Rams’ Sept. 21 Homecoming on Storify:
www.Fordham.edu/Homecoming2013 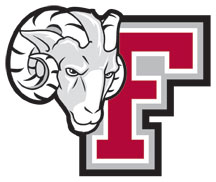