skip to main content
Return to Fordham University
You are at:Home»Athletics»Fordham Athletes Participate in 2012 Olympic Trials

Four Fordham hopefuls went to the Olympic Trials in June for the chance of a lifetime—to compete in the 2012 Summer Olympics in London. 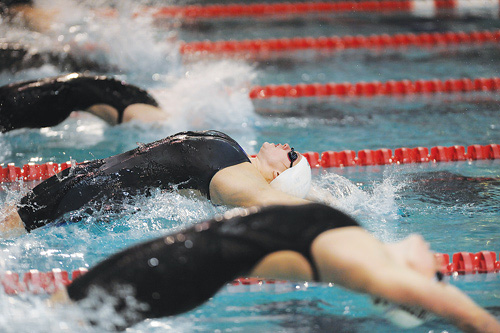 Rising senior and swimmer Brienne Ryan was four slots shy of competing in backstroke semifinals for the 2012 Olympics.
Photo by Craig Melvin

The glory of having made it to the trials came at the end of a rough road of disciplined training for the athletes. Salerno, who made it to the semifinals during the June 21 through July 1 trials in Eugene, Ore., had to balance a grueling training regimen with her full-time job as a breast cancer researcher at Memorial Sloan-Kettering Cancer Center.

In addition to working the 40-hour work week, Salerno practiced on the track two to three times per week, and on the other days alternated 60- and 90-minute runs—bringing her total running distance to between 60 and 70 miles weekly.

“I do this running on my lunch break,” she said. “I am fortunate enough to have a boss that understands my commitment to the sport.” 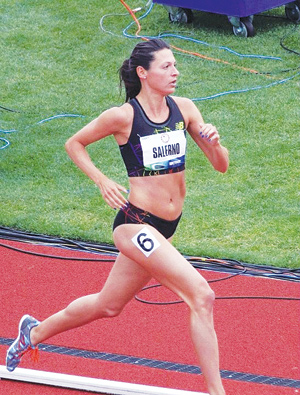 Salerno, who has been on the track since she was 13 years old, saw her steady efforts pay off. With a time of 4:12.82 in the 1,500-meter event at a meet held at Stanford University on April 29, she automatically qualified to participate in the trials.

“Going into the trials, I [was]a bit of an underdog, but I believe in dreaming big… I am always striving to be better and achieve more,” she said.

Another so-called underdog of the trials was Ryan, who competed in the 100- and 200-meter backstroke event at the swimming trials June 25 to July 2 in Omaha, Neb.

Dubbed a “bigtime dark horse” in a SwimSwam.com article highlighting the Olympic qualifiers, Ryan faced previous Olympians and American record-holders in the events leading up to the trials, ultimately achieving a time of 1:01.54 in the 100-meter backstroke.

Gaston and Rooney both joined their ancestral or native countries’ basketball teams in an effort to reach London. Gaston, who was named Second Team All-Atlantic 10 and Second Team All-Met in the 2011-12 school year, traveled to Puerto Rico in May to join the other Olympic hopefuls. Unfortunately, he was injured during tryouts.

Rooney, a native of Christchurch, New Zealand, played for the New Zealand National Team, the Tall Ferns, before coming to the states for college in 2009. She was recently named to the team again, which competed against the Czech Republic and Argentina during the quarterfinals in Turkey from June 25 to July 1.

Though the team suffered a heartbreaking 54-51 loss to Argentina, taking them out of the running for the 2012 London Games, the stint on the national scene was a personal achievement for Rooney nonetheless: She is the second basketballer in the Fordham-Olympian legacy, joining former Ram Mobolaji Akiode, who played for the Nigerian National Team in the 2004 Olympics.

Fordham alumna Kerri Gallagher, FCRH ’11, also qualified for the track and field trials in Oregon with a time of 4:16.07 in the 1,500-meter event, but had to cut her season short after a bout of bronchitis.