skip to main content
Return to Fordham University
You are at:Home»Athletics»Football Rams Add a Special Member

Football teams are always looking for someone who can make a difference. But it is unusual when that person is not yet four years old, and when the difference he makes can be measured in smiles and perspective—not touchdowns and tackles. 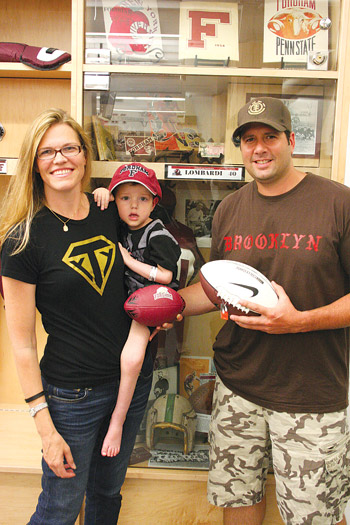 Ty Campbell and his parents pose in front of a locker containing historical Fordham football memorabilia. Photo by Vincent Dusovic

The newest addition to the Fordham football program is Ty Campbell, who was “adopted” by the Rams earlier this fall through the Friends of Jaclyn Foundation. Ty is an extremely courageous and lovable boy who is undergoing treatment for a rare and aggressive cancer called Chordoma.

Campbell and his parents, Cindy and Lou, recently visited the Fordham football locker room where they met Coach Tom Masella and members of the team. On behalf of the team, Masella presented Ty with Fordham gifts, including a football signed by former Ram and current Arizona Cardinals quarterback John Skelton, as well as a Fordham hat and jersey.

Despite having undergone radiation treatments at Memorial Sloan-Kettering Cancer Center that morning, Ty beamed when he received the Fordham hat, which he immediately donned to rousing applause from the team.

Ty also gave gifts to the team—special “Super Ty” black wristbands—so the Rams can display their support for him. But more than the wristbands, Ty lit up the room with his smile and his toughness, as his mother explained to him, “The football players beat up the other teams just like you beat up cancer.”

As a member of the team, Ty and his family, which includes Ty’s younger brother, Gavin, were invited to return whenever they like to watch practice and to attend games—home or away. The Campbells are hoping to attend the Fordham-Army game on Oct. 29 because West Point is near their home in Pawling, N.Y.

An official adoption ceremony, to be attended by the team and the Friends of Jaclyn Foundation, is being scheduled.

“Ty is one of the toughest and bravest kids I have ever met,” Masella said. “What he and his family have been going through is impossible to imagine. We just hope that by making him part of our team, we can take his and his family’s mind off of the medical issues for awhile.”

The Friends of Jaclyn Foundation is a 501(c)(3), non-profit, charitable organization that improves the quality of life for children with brain tumors and their families. The foundation matches a child with a college or high school sports team based on geographic location. Once the team and child have been matched, a ceremonial adoption occurs.

Ty is the second child to be adopted by a Fordham team through the Friends of Jaclyn Foundation. In 2009, the Fordham cheerleaders adopted Meaghan Tully, a 15-year-old high school student who is fighting germinoma brain cancer.