skip to main content
Return to Fordham University
You are at:Home»Athletics»Breaking the Ice

Gliding across the ice rink at a recent practice session in New Jersey, Nicole Rajic extended her arms, twisted her body, and began spinning rapidly on one foot.

Rajic, GABELLI ’18, a professional figure skater who is majoring in global finance and global economics, said she tried lots of “different sports” as a child, including tennis.

“But I always liked skating. I was really drawn to it.”

In March, Rajic—who uses “Rajicova,” the Slovak version of her name when competing—participated in the 2017 ISU World Championships in Helsinki, Finland. She skated to Francis Lai’s “Love Story” in the short program, and Ezio Bosso’s “Rain, In Your Black Eyes” in the long program. Rajic finished 17th overall at the competition and earned a spot for Slovakia, the country of her parents’ birth, in the upcoming 2018 Olympic Games.

“The atmosphere in the arena was wonderful, making it much more fun to perform,” she said.

This summer, Rajic, a rising senior, is busy training for the 2017/2018 skating season, which begins in the fall.

“Summer training is really crucial to the coming season,” she said. “You have to get into the best physical shape.”

Rising to the top

“My parents just kind of put me on the ice because they thought it would help out with my balance when I was younger, and I stuck to it,” she said.

In 2011, she made her professional debut in the Golden Spin of Zagreb competition in Croatia, also on behalf of Slovakia, the country of her heritage. Since then, she has competed in several competitions around the world, including the 2013 Three National Championships in Poland, where she received a gold medal; the 2014 Winter Olympics in Sochi, Russia, where she finished 24th overall; the 2015 Skate America and Cup of China, where she ranked 7th; and the 2017 European Championships in Czech Republic, where she ranked 7th overall and achieved the best total score of her career. 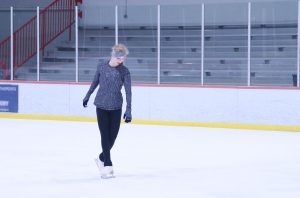 Nicole Rajic practices for the 2017 ISU World Championships in March.

“Skating really makes me happy at the very simplest level,” said Rajic. “My favorite part is competing and performing well at a competition, because there’s nothing in my life comparable to that feeling of a successful competition or an exhibition of everything I can do—all at once.”

Bouncing back after a fall or injury during a competition is among the biggest challenges of the sport, she said. However, with practice, she learned to not let her mistakes affect her overall performance.

“That comes by approaching the program one element at a time, and going step by step,” she said. “If one step fails, then you get up. You know you have a couple of steps after that to redeem yourself.”

During fall 2016, Rajic had to juggle school and practice for 2017 ISU World Championships. She’d practice in the morning before class for a few hours, then return to the rink after her classes to continue.

“It’s really difficult to work with a body that’s sore, or exhausted from having studied all night,” she said.

On those occasions when she feels challenged, “I turn off my brain and try to realize that the harder I struggle in practice, the easier it’s going to be on a day that I have energy.”

Skating professionally while attending business school has improved her time-management skills, Rajic said, and given her the confidence and endurance to excel both in the classroom and on the ice.

“There is a healthy competitive environment among business students,” she said. “We all want to do as well as we can, and that competition, focus, and discipline translates into skating,” she said, “and into performing at my best.”