skip to main content
Return to Fordham University
You are at:Home»Athletics»Behind Men’s Soccer’s Rally? A Coach Who Loves to Play the Game 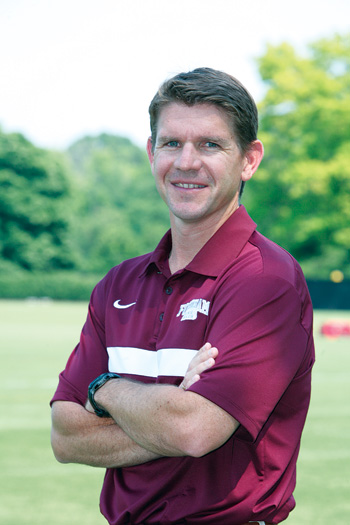 Jim McElderry, the men’s soccer coach, is Fordham’s coach of the year.
Photo by Tom Stoelker

Jim McElderry arrived at Fordham in 2003 already a success.

He and the Rams’ men’s soccer team he coaches have been on an upward trajectory ever since: The squad will begin its 2012 season as defending Atlantic 10 champions.

At May’s 78th Annual Block F Awards Dinner, that triumph brought McElderry his first Iron Major Award as Fordham’s coach of the year, as voted by his peers.

The accolades poured in for his players, too, with seven earning All-Atlantic 10 honors, including goalkeeper Ryan Meara, who also received the division’s defensive player of the year honor and the University’s Vincent T. Lombardi Award as its top male student-athlete.

“This past year, our players realized we could play with anybody,” McElderry said. “We never could have done that eight years ago.”

Although preseason practice doesn’t begin until Aug. 8, McElderry is not resting on those laurels.

Inside his office in Collins Auditorium on the Rose Hill campus, McElderry was planning travel schedules, finding hotels, securing transportation and managing the team budget. He was also readying to leave for Texas on a scouting mission.

“That’s the main part of our job,” he said of his coaching staff. “We’re trying to map out the future.”

He had already spent a decade in the coaching ranks when he came to Fordham. As a coaching assistant at Fairfield University, his alma mater, he helped guide the Stags’ squad to the Metro Atlantic Athletic Conference (MAAC) championship game four years straight.

McElderry had lettered all four years of his own college career, and, as a defensive midfielder, earned the MAAC player of the year award in 1992. He graduated the next year with a degree in math.

His coaching career began a year later. So did his professional playing years, with the New York Fever and the Long Island Rough Riders of the A-League, at the time the apex of North American professional soccer.

But, McElderry said, accomplishment on the soccer field involves a multi-pronged test, particularly at Fordham, where student-athletes – especially those who come from out of state or overseas – face rigorous examination.

“For me, most important is can they handle the academics,” McElderry said. “If they don’t, they won’t play well. … It’s a major part of what we preach here.”

The squad, though, graduated nearly a dozen players this year. And Meara, who intends to complete the three classes he needs for his business administration degree, is now the starting goalkeeper for the New York Red Bulls of Major League Soccer.

But with a strong recruiting class, including highly touted players from Texas, Ohio and Arizona, expected to couple with the team’s returning core, McElderry hopes to replicate success. The greatest challenge, though, will be to find a goalkeeper – and a leader. Meara backstopped the league’s stingiest defense, which allowed division opponents to collectively net just over a half a goal a game. He was also named the Rams captain in his junior year.

That last role, though, didn’t come naturally to him, and he credits McElderry for helping him to cultivate leadership qualities, and his vocal chords.

“That’s something that Jim always stressed,” Meara said.  “He really helped me develop those skills. He takes the job very seriously, and that wears off on the team.”

Meara said McElderry’s passion for the game is always palpable, as he emphasizes “treating every game almost like it’s your last.”

After eight years at Fordham – including four years at Fordham Prep – Meara did play his last game for the Rams – a double-overtime, 1-0 win over Temple that clinched the division title, and earned Meara the last of his school-record 31 shutouts.

In a few weeks, McElderry will begin his 10th year at Rose Hill, with expectations, borne of success, maybe never higher.

“It’s a learning process for everyone involved, including me,” McElderry said. “It’s a great environment here, but it’s a challenging place.”