The Fordham University baseball squad came out on April 20 and 21 to rally for a good cause while playing their Atlantic 10 conference series game against LaSalle University. 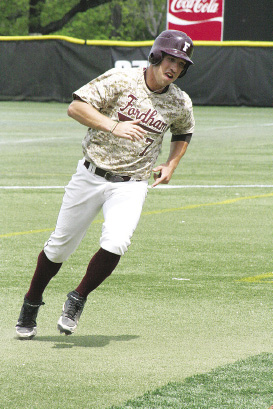 Ryan Lee, a junior at the Gabelli School of Business, and a Fordham baseball team outfielder, rounds a base while raising money for wounded veterans.
Photo by Joe DiBari

The team sold camouflage t-shirts at Houlihan Park in order to raise funds for the Wounded Warrior Project, an organization that helps wounded service members and their families cope with living with the mental and physical wounds of war.

Fans at the games helped the cause by either purchasing a T-shirt or other merchandise, or by making a pledge amount for each run scored by the Rams over the weekend.

In all, Fordham raised more than $4,000 for the project, winning two of its three games against LaSalle.

As part of the campaign, the Rams also wore special camouflage uniforms to show their support of the project.

“The Wounded Warrior Project is a great organization that we are proud to support. We are so fortunate to have men and women that risk everything to keep our country safe, and it is the least we can do to show our appreciation to these heroes,” said Fordham head baseball coach Kevin Leighton.

In addition to raising public awareness, the Wounded Warrior Project’s vision is to foster the most successful, well-adjusted generation of wounded service members in the nation’s history.

The project helps injured service members aid and assist each other by providing unique programs and services to meet their needs, such as sponsoring adaptive sports activities, and offering combat stress recovery workshops and retreats.

More than 44,000 service members have been physically wounded during the current military conflicts in Iraq and Afghanistan. Hundreds of thousands more are estimated to be recovering from invisible wounds of war, including post-traumatic stress disorder, traumatic brain injury, and major depression.

This is the second event in which Fordham Athletics honored the Wounded Warrior Project this academic year. In September, the Fordham football team welcomed Wounded Warrior and Bronx resident Staff Sgt. Carlos Gonzalez, a Fordham student, and SSG Ali Naqi. Both veterans were honorees at the Liberty Cup game against Columbia University.