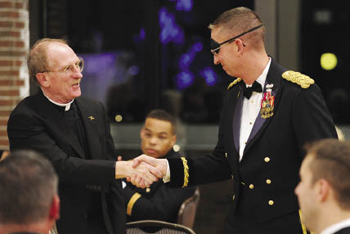 Joseph M. McShane, S.J., president of Fordham, and Brig. Gen. Theodore D. Martin, commandant of West Point, wish the other side luck on the night before the Fordham-Army football game.
Photo by Chris Taggart

Tom Dolan (FCRH ’51) stared at the list of names enshrined in the Army Sports Hall of Fame and began pointing to the ones he recognized.

It had been more than six decades since he played football for Fordham in an infamous game against Army. Still, Dolan could recall the players he lined up against.

“It was a rough game. Half of the team was ejected before it was over,” he said. “I should know; I was one of the guys who got thrown out.”

Dolan and three of his teammates from that 1949 Fordham squad recently returned to West Point to watch the two schools restart their gridiron rivalry.

And they weren’t alone.

The game caught the imagination of Fordham alumni, students, fans and friends, who bought roughly 2,400 tickets to the Oct. 29 contest through the University. The unprecedented outpouring of support led the University to charter buses from as far away as Philadelphia and Boston.

Some fans relished the historic implications of a Fordham-Army matchup. Others were enticed by seeing the Rams play in a big-time football environment. Still more saw the game as a unique opportunity to support Fordham. 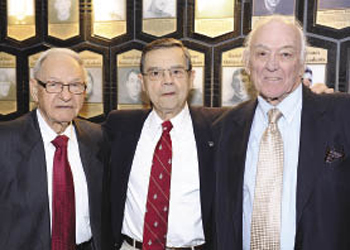 “Playing Army has elevated Fordham’s football profile a great deal,” said Harry Hamlin (FCRH ’55). “We played Connecticut to start the season, but there was no zest—no real reason to be excited. But this… this is something special.”

Hundreds of students made plans to attend—including graduate students, who used the occasion to network with alumni. That was the aim of Mita Menezes, a second-year student in the Graduate School of Business Administration (GBA).

Menezes, who had never seen a live football game, rode a ferry up the Hudson River with roughly 100 business alumni and about 50 GBA students.

“With the graduate program at Lincoln Center, we are somewhat removed from the rest of the Fordham community,” she said. “This was an opportunity to bring all of Fordham together and a great networking event for us.”

By the time the weekend arrived, the game had escalated into a two-day affair loaded with attractions that honored both programs’ history and traditions.

The events began on Friday night, when the West Point Association of Graduates invited members of the Fordham Gridiron Club to tour the Army Sports Hall of Fame and attend a gala dinner.

“The idea of a football game and a gala is unique,” said Mary Anne Sullivan (TMC ’73). “I’m blowing off my Yale Law School reunion next weekend because this just seemed like it would be more fun.”

The full ritual and regalia of West Point was on display that evening, including a presentation and retirement of the colors, a series of formal toasts, and remarks from Brig. Gen. Peter M. Dawkins, who won the Heisman Trophy for Army in 1958. 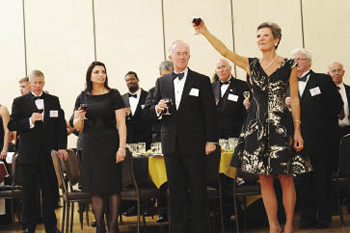 The Hon. Loretta Preska (LAW ’73) delivers a toast to open the gala dinner on the night before the Fordham-Army game.
Photo by Chris Taggart

Lombardi (FCRH ’37) was a member of the famed Seven Blocks of Granite at Fordham during the 1936 season. He was an assistant coach at Rose Hill in 1947 and 1948 before taking an assistant coaching position at West Point in 1949.

“Even today, Lombardi represents all that is strong and rugged and right about the game of football,” Dawkins said.

Later that evening, he read a letter from Vincent Lombardi Jr., who conveyed his appreciation to Fordham and West Point for honoring his father.

“The Jesuits at Fordham taught him that if you pursue perfection in every facet of life, you might achieve excellence,” Lombardi wrote, “and at Army, he learned from Colonel Red Blaik that to accomplish anything worthwhile, you have to pay the price.”

At the close of the evening, Brig. Gen. Theodore D. Martin, commandant of West Point, told the Fordham football faithful what they could expect from his cadets during the game.

As it turned out, the game was also a very snowy fight.

As one chilly fan remarked from his seat in Michie Stadium, it was weather that only Lombardi himself could have loved.