John’s wife Maureen and daughters were joined by his broadcast partner for many years, Marv Albert, in accepting the award, which pays homage to the illustrious Fordham player and coach who later went on to a distinguished career in the National Basketball Association (NBA).  It was noted that Andariese was coached by Bach (1956-60), the winningest coach in Rams’ history, who also played hoops at Fordham (1943-47), and was coached by the football icon Vince Lombardi, the freshman basketball coach at the time. 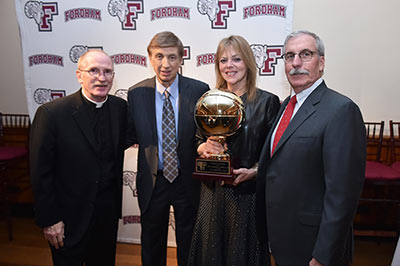 “He and Johnny Bach are up there, amazed,” said Maureen Andariese. “They were like bookends, the two nicest, most handsome men I’ve ever been around.

“Everything about him was ‘you’re going to win it,’” she continued in her emotional remarks. “His attitude was never give up. Fight, fight, fight. I hope this night brings the Fordham teams significant success.”

Adam Silver, the NBA commissioner and a close friend of Andariese, reflected on Andariese’s career and offered personal anecdotes. He remembered that Andariese would delight in the simplicity of a great BLT sandwich – “the bacon Adam, the bacon” – and recalled the nattily-dressed broadcaster’s love for fine clothing: “He was Johnny Hoops, but we called him ‘Johnny Suits,’” laughed Silver. “’Feel this (fabric) Adam.’ If he liked a BLT sandwich, you can imagine how he felt about fabric.”

Albert cited the qualities that made “Johnny Hoops” so superb at his chosen craft: “his passion for the game, his ability to break it down, and his sense of humor,” and recalled that his friend would always chuckle when Albert referred to him on the air as the “53rd all-time leading rebounder in Fordham basketball history.”

“Somewhere Johnny Hoops and his one-time coach are taking this all in,” wrapped up Albert.

Andariese starred at Fordham under Bach’s tutelage from 1956 to 1960, appearing in two National Invitational Tournaments as an All-City player, and serving as team captain in his senior season at Rose Hill. The two remained close friends for six decades.