skip to main content
Return to Fordham University
You are at:Home»Athletics»A Fun-Filled Bash, a 5K Ram Run, and a Great Win 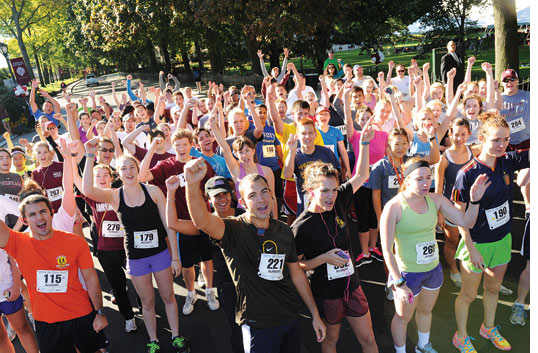 At this year’s homecoming, approximately 130 members of the Fordham community participated in the first annual 5K Ram Run.
Photos by Chris Taggart

For Ellen LaFurn, GSE ’96, a Fordham homecoming is an annual tradition that she holds close to her heart. 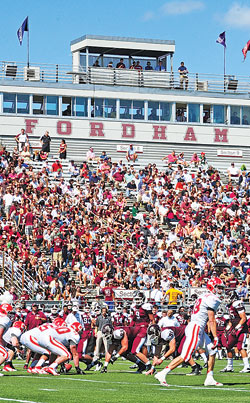 As a widow and single parent, she said she did not have the typical college experience.

“Fordham was there for me, and it’s heartwarming to be back,”LaFurn said.

LaFurn was among the alumni who attended Homecoming 2012 on Sept. 15, an event that drew 5,000 people to the Rose Hill campus. It was the biggest homecoming turnout on record.

Sitting on Edwards Parade, LaFurn recalled her own emotional graduation on the same lawn in 1996.

“You felt like you were a part of this big thing that was larger than life,” she said. “I feel that way now, 16 years later at homecoming.”

“I come to say hello to old friends,” Geiss said. “It’s great to reconnect with everyone again.”

For Gerry Heintz, GSB ’82, the day was a chance to promote the University to his daughter, whom he brought for the first time.

“I’m pushing Fordham because it’s a great school with an infectious vibrancy,” Heintz said. “From soup to nuts, it was a complete learning experience for me.”

In addition to the grilled food, mingling, and face painting for kids, another event was added to the festivities this year: a 5K Ram Run that included alumni, students, families, and friends of Fordham. Approximately 130 attendees participated in the run, which began at 9 a.m in front of the McGinley Center and wound its way past Hughes Hall, behind Campbell Salice and Conley residence halls, and past the William D. Walsh Family Library before returning to McGinley.

“As I was running past Thebaud Hall, I remembered sprinting to make it to class when I was late,” said participant Nicole Grotman, FCRH ’06. “So it was a nice walk—or run, rather—down memory lane. “

“I’ve done a couple of 5Ks before, but this one was just for fun,” Sinto said.

Zapatka, who is new to Fordham this year, saw the run as a way to familiarize himself with the campus.

“I went to a smaller undergraduate school, so it was impressive to see the turnout and the different kinds of alumni,” he said.

Alumni and students rooted for the Rams, as they turned a trailing game into a win. At half-time Cornell held a 7-6 lead, which increased to a 14-6 as Big Red drove 78 yards to score in the third quarter.

But the Rams responded quickly, rallying in the second half to add 28 points for the win, by scoring on four of their final possessions. The final score was 34 to 27.

Melissa Gazal, a Lincoln Center campus junior, said she got inspired by the high-spirited mood running through the crowds.

“It’s such a great atmosphere and everyone has so much enthusiasm. I love the school spirit and I couldn’t stop smiling!” Gazal said.

And there was certainly a reason to smile as the Rams’ win over Big Red gave them a 2-1 record on the season.

“It was definitely a sight to see the crowd on its feet and chanting ‘Fordham!’ together,” Francesco Nasso, FCLC ’12, said. “I will be back next year.”