skip to main content
Return to Fordham University
You are at:Home»Arts and Culture»Who Owns Street Art?

Lady Pink, who illegally tagged subway cars in the 1970s and 80s and successfully segued into life as a professional artist, was the keynote speaker at a daylong academic symposium, “Law, Urban Space and the Future of Urban Expression.”

After years of doing graffiti illegally, today she only exhibits in galleries, museums, and other “respectable places,” she said.

Yet when the New York City Police Department’s vandalism squad determined in 2013 that she had involvement in the Underbelly Project—in which artists painted an abandoned subway station in Brooklyn—they raided her apartment and confiscated her paint, computers, and photos, she said. It was the second time that the police confiscated her property.

“I had to sit on my sofa and watch them rob me again,” she said.

“The vandal squad told me…‘You don’t have to come out into the streets to inspire people,’” she said. “[But] the whole point of street art is to inspire everyone.”

Street artists are being persecuted, said Lady Pink, because events like the Underbelly Project—in which artists created large-scale works in an abandoned subway station—revealed a gap in the city’s security.

Even though cleaning graffiti is “a kind of price we have to pay for living in New York City,” Lady Pink says that cities have to make more opportunities to allow visual artists to express themselves.

The symposium was sponsored by the Urban Law Center, the Urban Studies Program at Fordham and the Fordham Art Law Society. 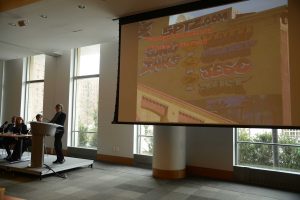 Jeannine Chanes, with images of 5 Pointz

VARA allows artists to preserve their artworks in the way they were created; it is why one can’t purchase an Alexander Calder sculpture and legally paint it a different color, for instance.

Christopher J. Robinson, a partner at Davis Wright Tremaine, LLP, said he was able to use VARA to help an artist win damages from the city after it destroyed her mural at Brooklyn’s Woodhull Medical Center.

Street artists also used VARA to challenge the 2013 whitewashing and demolition of the Queens graffiti mecca 5 Pointz and other street sites of original art.

Jeannine Chanes, LAW ’96, who represented the 5 Pointz artists, said a key qualification for preservation under VARA is acknowledgement of the art’s importance to a cross-section of society. She said she was offended by the judge’s interpretation of VARA as simply a way to provide monetary relief to artists whose works have been destroyed.

“For the 5 Pointz hearings, we brought in art experts, but I really think a better judge, especially for street art, is … the people who look at it every day and want it there.”

“He really thought that money would solve the problem. [He] said there’s no irreparable harm, because paintings were meant to be sold, and plaintiffs would be hard pressed to contend that no amount of money would compensate them,” she said.

“But art is not dollars and cents. Art is art.”