skip to main content
Return to Fordham University
You are at:Home»Arts and Culture»What Can an Arts and Sciences Degree Get You? The Possibilities Are Limitless, Says GSAS

Some might regard Fordham alumnus Nathan Tinker’s path from obtaining an English doctorate to becoming executive director of New York’s leading biotechnology advocacy group as unorthodox.

But for current leadership at the Graduate School of Arts and Sciences (GSAS), the question to start asking is: Why wouldn’t an English scholar be the perfect fit for such a job?

This year GSAS launched a new professional development initiative called GSAS Futures. Funded by GSAS and the Graduate Student Association and staffed by graduate students, the program aims to prepare GSAS students for innovative careers after Fordham—whether or not these careers are academic. 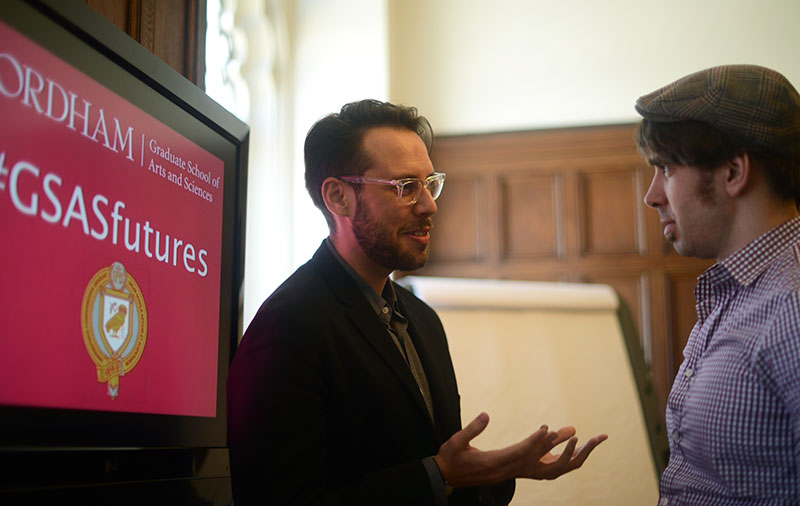 The Futures program pivots on the idea that an advanced degree in the arts and sciences is intrinsically valuable. Its philosophy is a unique response to an ongoing national conversation about the “usefulness” of graduate studies, especially in the humanities, relative to disciplines such as science and technology.

According to GSAS Futures, graduate students do not need to justify their training by recasting it in more “marketable” terms; rather, students need to harness and articulate their distinct expertise.

“It’s saying, ‘This is my skill set, and it prepares me to do many things well.’ The idea is to identify what those skills are and how they match up with the needs of a nonprofit organization, or a government agency, or any of the careers our alumni have entered.”

For an English scholar like Tinker, this would mean underscoring skills such as being able to grasp complex material quickly or distilling a vision for multiple audiences, Van Wyck said.

“With GSAS Futures, we want to ensure that if Nathan Tinker had wanted that career all along, we would’ve been preparing him from the moment he arrived on campus.”

Historically, graduate arts and sciences programs have often demurred from encouraging students to consider careers outside of academia, said Interim Dean of GSAS Eva Badowska, PhD. However, the data on actual students outcomes have consistently told a different story. 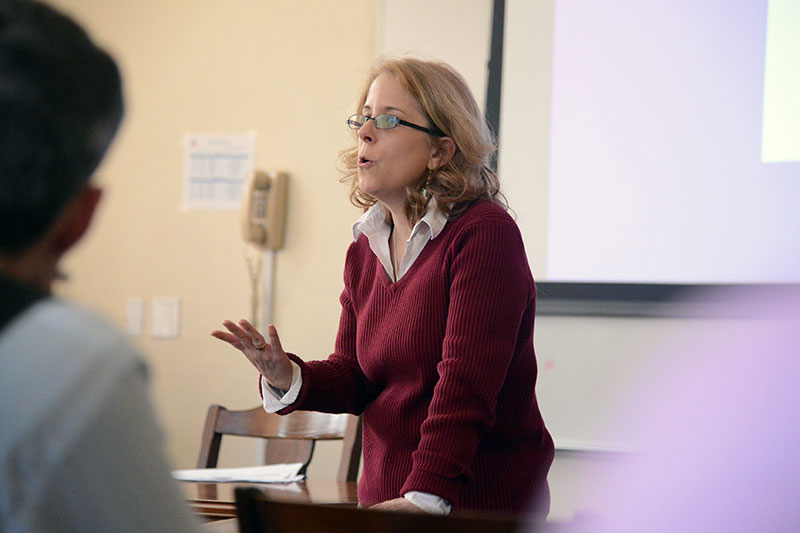 The most key question for graduate students is, “What do you really want?” said Lexi Lord, PhD, at a GSAS Futures event on March 24.
Photo by Joanna Mercuri

“About 50 percent of graduate students nationally go on to nonacademic careers,” Badowska said. “We have lived in a kind of imaginary space believing that only a small proportion of PhD holders end up in nonacademic careers, whereas there has always been a substantial number of PhDs who do so.”

Graduate schools are slowly starting to recognize this reality by offering more robust career preparation, Badowska said. At Fordham, this recognition has manifested through initiatives such as the newly formed Liberal Arts Task Force and now GSAS Futures.

“Preparation for academic careers happens beautifully in academic departments. But the graduate school can provide something in addition to that, which is the more professional side—for instance, CV and résumé writing, networking, digital presence,” she said.

“We’re giving students the space to think about and articulate the high-level skills they have away from the particular academic field in which they already practice them.”

Anna Beskin, an English doctoral candidate, regularly attends GSAS Futures events. One of the program’s greatest benefits, she said, is the opportunity to gather with peers and share thoughts about graduate training and life after Fordham. These discussions have helped Beskin and her classmates home in on the skills and qualities they have to offer the professional world.

“Being good at close reading, at analyzing, at seeing various perspectives of the same issue serves me well in daily life, not just in academics,” Beskin said. “I see that with my own [undergraduate]students, too. Every time we push their understanding of a text, or complicate something that seemed simple originally, it opens up a different path of thinking. It’s exciting.

“I wish we didn’t have to defend [graduate study], but I feel we sometimes do. So it’s good to be self-aware enough to at least be able to speak about it from your own perspective.”

In addition to organizing professionalization events for GSAS students, the Futures program is also working with campus partners such as Alumni Relations to collect extensive data on graduate student outcomes. The goal is to both analyze where alumni have ended up and follow up with current students after graduating. 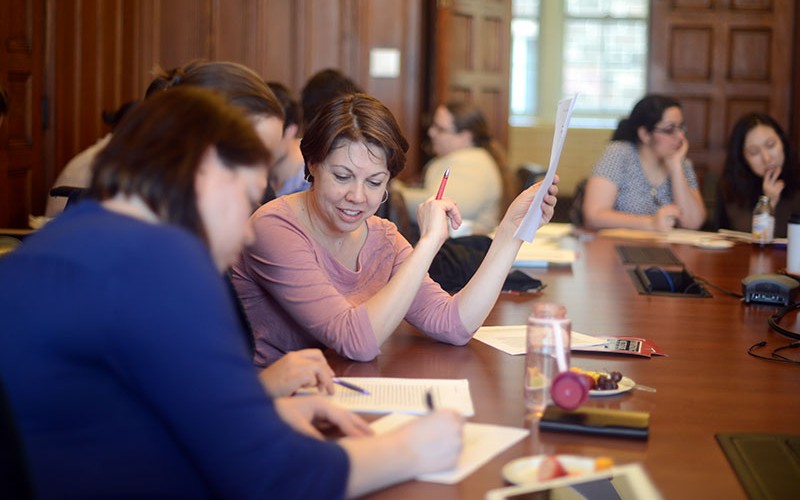 Students in the Graduate School of Arts and Sciences worked with scholar Augusta Rohrbach, PhD, March 12 about “thinking outside the book.”
Photo by Joanna Mercuri

There’s more to the data analysis than simply observing outcomes, Van Wyck said. It is also important to dig deeper to understand the steps graduates took that led them to the jobs that seem incongruous—like Tinker’s path to biotechnology.

“The data is beginning to tell us a story that many people still have trouble believing. Yes, many of our students go on to nonacademic careers, but they don’t go on to failed careers,” he said.

“The clichés circulated in the media about the PhDs who go on to work at Starbucks are flat-out wrong, especially for Fordham graduate students. They don’t take into account the complexity of the lives our students lead after they graduate and the interesting careers they build for themselves.”

Coming up: On April 30, GSAS Futures will host its inaugural Alumni Panel and Networking event. Find out more about the event here.
In the meantime, GSAS Futures is already working to effect change from the ground up, to fundamentally shift the way incoming graduate students view themselves.

“We need to jettison the idea that there is something incongruous about going from being an English scholar to the director of New York Bio,” Van Wyck said.