skip to main content
Return to Fordham University
You are at:Home»Arts and Culture»WFUV to Honor Giants of Journalism and Sports Broadcasting

Fordham welcomed Rose in 2008 as its commencement speaker and awarded him an honorary degree for his work profiling those on the cutting-edge of their fields, exploring fresh ideas, and illuminating difficult issues. In 2013, he won an Emmy Award and Peabody Prize for his interview that year with Syria’s President Bashar al-Assad. Just last year he was named one of the 100 most influential people in the world by Time magazine. 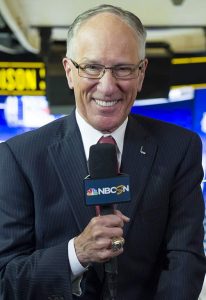 Mike Emrick, a play-by-play announcer for NBC and NBCSN and former voice of the New Jersey Devils for 21 seasons, will receive the Vin Scully Lifetime Achievement Award in Sports Broadcasting. The award is named after the Hall of Fame broadcaster, play-by-play voice of the Los Angeles Dodgers, and alumnus of Fordham (1949) and of WFUV.

Emrick, now in his 39th year covering professional hockey, has called more than 3,000 hockey games and worked on 25 consecutive Stanley Cup playoffs in his broadcast career. He served as the lead announcer for NBC’s coverage of men’s and women’s ice hockey at the 2014 Sochi Olympics, marking his seventh Winter Olympics assignment for NBC.

He is a two-time Emmy Award winner for best sports play-by-play personality.

Television anchor and journalist Jane Pauley will moderate an armchair discussion as the awardees reflect on their extraordinary careers. Two Fordham students who have demonstrated a commitment to pursuing media careers in news and sports will also be spotlighted.