skip to main content
Return to Fordham University
You are at:Home»Arts and Culture»WFUV Honors Broadcast Legends at On the Record Awards Dinner
Photos by Chris Taggart
A trio of giants from the worlds of sports and news broadcasting was feted at WFUV’s annual On the Record awards dinner on Oct. 1.

Held at the Lincoln Center campus, the dinner was a celebration of both those at the pinnacle of their careers and those just starting out; two student broadcasters also received awards for their accomplishments. It was a particularly poignant evening for Pauley, who, after 30 years in news broadcasting, succeeded Charles Osgood, FCRH ’54, as host of CBS Sunday Morning in 2016.

Pauley was presented the Charles Osgood Award for Excellence in Broadcast Journalism by CBS Sunday Morning producer Rand Morrison and Osgood himself, who sat next to her as she stood at the podium. Morrison said he knew they could never replace Osgood, but that Pauley has exceeded their every expectation.

“It was our lucky day at Sunday Morning, because suddenly the path became clear and all fell into place. Jane getting this award with Charlie’s name on it could not be more appropriate. It’s like coming full circle,” he said.

Pauley said she was still amazed to have gotten the best job of her life when she was 65, and confessed to feeling pressure to live up to the standards that Osgood upheld.

“When I first started at [CBS Sunday Morning], inevitably I would hear the voice of Charlie, [in my head]  because no one spoke the language with such effortless eloquence, pacing, and timing as him. Maybe a year or two years went by, and I stopped trying to be you,” she said to him.

A Storied Career in Baseball

McCarver was a two-time all-star and two-time World Series winner who played for the St. Louis Cardinals, the Philadelphia Phillies, the Montreal Expos, and Boston Red Sox, from 1959 to 1980. He went on to call a then-record 23 World Series and 20 All-Star games and earn three Emmy Awards. On Tuesday, he was presented the Vin Scully Award for Excellence in Sports Broadcasting.

Scully, a 1949 graduate of Fordham College at Rose Hill, lauded McCarver in a short videotaped message from Los Angeles, where he called games for the Los Angeles Dodgers for 67 years before retiring in 2016. Steve Hirdt, a nationally recognized statistician and longtime friend of McCarver, presented him with the award. He noted that McCarver was able to bring into the broadcast booth the kind of knowledge that only someone with 21 years behind the plate can bring, such as the best way to run from third base to home when a ball is hit to the third baseman (shadow him, and then break for home if he throws to first).

“These things are things that would be delicious morsels of information not just to casual viewers, but to people such as myself who have watched baseball my entire life,” he said.

“When the rights to televised broadcast baseball shifted from one network to another, the first thing the networks would do is go after McCarver.”

In his acceptance speech, McCarver noted that when Roger Maris broke Babe Ruth’s homerun record in 1961, he was never walked by opposing pitchers, because fellow slugger Mickey Mantle batted after him. Just as this afforded Maris an opportunity, he said, his success was due in part to the generosity of others.

“This is a very emotional moment for me and my family,” he said, noting that because he’d won the award, he got the chance to speak with Scully over the phone for the first time.

“Vinny—you would have thought he played the game. He understood it like no man who hadn’t played it did.”

Trailblazing a Path for Women

In a first for the event, a third special tribute award was also bestowed, upon Christine Driessen, GABELLI ’77, who recently stepped down as executive vice president and chief financial officer for ESPN.

Driessen joined the network in 1985, and in 33 years, she rose to become the most-tenured senior woman there. She is credited with helping the network’s unprecedented growth during that time, and, in her remarks introducing her, Fordham women’s basketball coach Stephanie Gaitley hailed her as a trailblazer for successful women in sports.

Driessen credited Fordham with introducing her to power of sports in business and in life.

“Fordham taught me the value of leadership, integrity, humility, and most importantly, speaking up for those who need a voice, especially women in business, and women from around the world, for the power of sport,” she said.

In a discussion afterward moderated by Sara Kugel, FCRH ’11, the award winners touched on everything from what advice they’d give to students looking to pursue a career in their fields, to the future of those same fields. Driessen suggested students work hard, learn to ask for what they want, and learn to communicate effectively. She also emphasized the importance of mentoring others, a point Pauley revisited later in the conversation.

“Christine, just in case you want to go to bed tonight not wondering whether you influenced someone positively or not, ding!” she said, raising her hand in the air and pointing to herself.

Proceeds from the awards dinner, which this year raised close to $160,000, help fund WFUV’s training programs for University students, two of whom also received recognition. Natalie Migliore, FCRH ’20, was given the WFUV Award for Excellence in News Journalism, and Charlie Maisano, FCRH ’20, was presented with the Bob Ahrens Award for Excellence in Sports Journalism—named for the station’s recently retired executive sports producer.

Migliore, WFUV’s current news director and a lead reporter for the station’s Strike a Chord campaigns, said she was grateful for the opportunity to work on extensively researched stories on air pollution in New York City and a school walkout against gun violence.

“WFUV is a gift to Fordham University students, and I’m beyond proud to enter the work force telling people where I started,” she said. 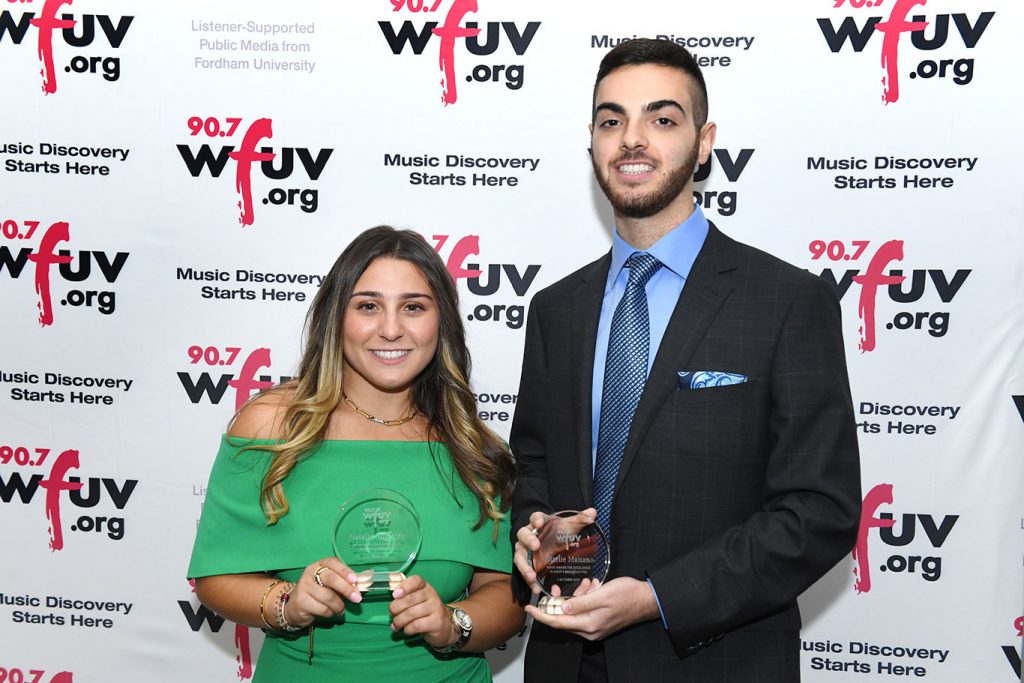 Fordham seniors Natalie Migliore and Charlie Maisano, who were also honored at the event.