skip to main content
Return to Fordham University
You are at:Home»Arts and Culture»Virtuoso Organist to Play at University Church 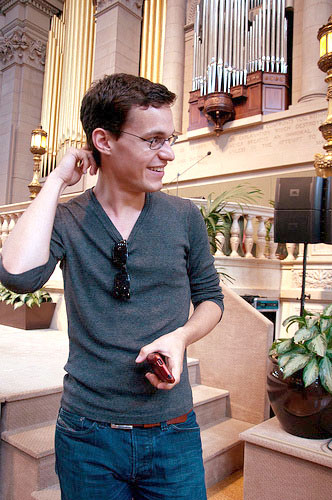 Referred to in the Pittsburg Post-Gazette as “one of the hot tickets in the country right now,” organist Nathan Laube will be performing classical music at the University Church this Sunday, Oct. 4 at 4 p.m. in the Rev. James Boyce, O. Carm., Memorial Recital.

“He is definitely one of the leading concert players in the world,” Robert Minotti, director of liturgical music, said of the 27-year-old Laube, who has been described in the mainstream press as a musical genius.

Sunday’s concert will include pieces by Marcel Dupré, Sergei Rachmaninoff, and Julius Reubke’s “Sonata for Organ in C Minor,” the last of which will be played without sheet music.

“The Reubke piece is a monumental composition that requires virtuoso abilities, which he has—and he will play from memory,” said Minotti. “That’s quite an accomplishment with only a day or two to practice on the instrument.”

While it’s common for pianists to play from memory, Minotti said, the keyboard that a pianist encounters at the concert hall is the same as the one he or she practices on at home. However, not so for organists.

“The organ is a machine that’s also an instrument,” said Minotti. “In addition to knowing the music, a performer must be able to find a particular button in an instant. There are similarities among organs but there are also lots of differences. Each is unique to the building they are in.”

Minotti said that, in addition to highlighting Laube’s dexterity, the Reubke piece also utilizes the different textures of the University organ, allowing listeners to hear sounds that emulate different parts of an orchestra.

Initially driven to become an architect, Laube eventually followed his love of music, enrolling in the Curtis Institute of Music in Philadelphia. He received a DAAD fellowship in Germany and a Fulbright grant in the United States. He has served as artist-in-residence at the American Cathedral of the Holy Trinity in Paris and as an organ scholar at Bryn Mawr Presbyterian Church in Philadelphia.