skip to main content
Return to Fordham University
You are at:Home»Arts and Culture»Van Hughes, FCLC ’05, Stars in “American Idiot” 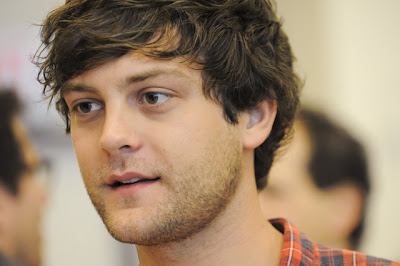 Van Hughes, a 2005 alumnus of Fordham University’s Theatre Program, has landed the role of Johnny in the Broadway production of American Idiot, the theatrical adaptation of Green Day’s rock opera of the same name.

“I’d been waiting in the wings, as they say, for about a year,” said Hughes, who had been an understudy for the musical’s three lead characters—Johnny, Tunny and Will—and whose Broadway credits include 9 to 5: The Musical and Hairspray. “It really taught me a lot about rolling with the punches, and never knowing what you’re going to get.”

In the show, Johnny is a disaffected youth, fed up with the trappings of modern suburbia. He moves to the city and quickly loses himself in sex, drugs and rock and roll, while his friend, Tunny, enlists in the military. A second friend, Will, languishes in the trio’s hometown, Jingletown, USA, raising a child with his girlfriend, Heather.

“It’s about people searching for meaning, like all shows,” he said. “It’s about these kids trying to figure out the next steps forward in a post-9/11 world.”

After studying musical theater at the Governor’s School for the Arts in Norfolk, Va., Hughes wanted to explore the craft of acting in full—which is how he ended up at Fordham.

“One of the main things I learned at Fordham,” he said, “was the importance of physical actions. You have to use your body to tell a story. Someone in the back row needs to understand the story by the way your body is positioned. I have to show [my character]is working something out while singing lyrics that aren’t necessarily expressing that.

“I combine what I learned at both schools for what I do every night on stage.”

In addition to his Broadway credits, Hughes has appeared in the films Sex And The City: The Movie, Sex and the City 2, Tenure and Rachel Getting Married.

His first official performance as Johnny was Tuesday, March 1, at the St. James Theatre.