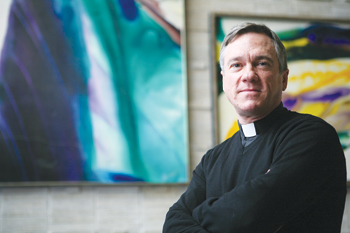 Now, 10 months later, the inventory is nearing completion and a few long-overlooked treasures have been revealed. With the significant pieces from the collection now identified, the University, under Father Waldrop’s direction, is mapping out a strategic approach for the future of the collection.

“We have very fine faculty teaching in studio art and in art history, but compared to the performing arts—theater or dance, for example—the visual arts at Fordham still lag in terms of their public face: collections and exhibitions,” said Father Waldrop.

“When you look at top-tier universities, most of them have significant art collections and impressive gallery spaces, and they see an institutional value there that drives their commitment. We want to move in that direction.”

Indeed, many universities take art collections seriously. The Yale University Art Gallery will be wrapping up a $135 million, 10-year expansion this month that will more than double the size of their gallery space. The core of that collection was launched with a gift of more than a hundred paintings from artist John Trumbull in 1832 (Fordham also holds a collection of Trumbull drawings). Rutgers University’s Jane Voorhees Zimmerli Art Museum has one of the largest university collections in the nation.

“I think the president’s initiative in creating my new position makes clear that Fordham fully appreciates the importance of the arts,” he said. “Jesuit education has always been centered on the humanities.”

Father Waldrop arrived at Fordham in 2009 by way of Berkeley and Rome, having earned his doctorate specializing in Italian Renaissance painting. Though his area of expertise is the 15th and 16th centuries, he has a keen eye for 20th-century art as well.

In an effort to highlight newly acquired or neglected works from Fordham’s collection, he has hung pieces by 20th-century painters on campus.

A pair of paintings by muralist Hildreth Meiére hangs in the lobby of the Walsh Library, while in the McGinley Center, work by abstract expressionist Paul Jenkins is now on view. Though Meiére and Jenkins share the same century, they sit on opposite ends of the stylistic spectrum, providing a glimpse of the collection’s diversity.

Meiére was one of the early American proponents of art deco. Her most prominent use of the style is in designs for the façade of Radio City Music Hall. But her passion for liturgical art brought her to Fordham, where she designed and painted the altar screens for the University Church.

Jenkins, who died this past summer, was affiliated with the abstract expressionists of the New York School. His two pieces in the McGinley Center recall artist Helen Frankenthaler’s stain paintings, with lush gestures and happenstance compositions.

Both artists represent categories where Fordham’s collections have some depth. Meiére’s work contributes to the University’s holdings in religious art, and Jenkins’ canvases belong to a small group of mid-century paintings and sculptures.

Categorizing and grouping will eventually suggest how the University should proceed with future acquisitions, said Father Waldrop. As is common practice with museum collections, identifying the strong categories helps define areas where a collection should grow.

“Fordham never collected systematically, so we have a disparate set of objects,” said Father Waldrop. “The Walsh collection [housed in the Museum of Greek, Etruscan and Roman Art]is really the one coherent collection.”

Father Waldrop said that building on the Walsh gift to Fordham—which includes more than 260 ancient objects donated by William D. Walsh, FCRH ’51, and his wife, Jane—is an obvious place to grow Fordham’s collection.

And the recent publication by Fordham University Press of the catalog Ancient Mediterranean Art: The William D. and Jane Walsh Collection at Fordham, not only highlights what has been done, but shows that Fordham’s antiquities museum is poised to grow.

But there are other collections that few outside the University know about. In the 1970s and ’80s, under the direction of former art history department chair Irma Jaffe, Ph.D., The President’s Print Collection was formed. With a dual focus on the religious and the secular, some 19 prints from the 19th and 20th centuries include numerous New York subjects. It’s one area Father Waldrop would like to expand.

“It’s New York City, after all!” Father Waldrop noted. “Fordham’s got the talent and the will, but we need space to make it happen.”

Two small galleries already exist on the Lincoln Center campus, but Father Waldrop said their size and off-street location are obstacles to mounting the kind of shows that draw attention in the competitive art scene.

Elsewhere, Boston College’s McMullen Museum is getting attention for its current exhibition, Paul Klee: Philosophical Vision from Nature to Art. At the College of William & Mary, a spring 2013 exhibition, Michelangelo: Sacred and Profane Masterpiece Drawings From the Casa Buonarroti, is already generating buzz. Both colleges worked closely with outside institutions to pull off the exhibits.

“We are eager to form alliances with other galleries and museums, and to find spaces for pop-up exhibitions,” said Father Waldrop. “Lincoln Center is a cultural hub but there’s a relatively vibrant arts scene in the Bronx, too.”

While he acknowledged that building on the art collection has potential to foster a new set of benefactors and friends, Father Waldrop said the main thrust of the effort is to teach. Whether the project is an exhibition of contemporary art, or cataloging 19th-century prints of New York City, students will be involved and experience the real-world hands-on effort.
“All the projects we’re proposing now have a pedagogical dimension, so including students is what it’s all about,” he said.