skip to main content
Return to Fordham University
You are at:Home»Arts and Culture»Tudor-Period Artifacts Rarely Seen in the U.S. Displayed at Walsh Library
Objects on display at Walsh Library, including Thomas More’s crucifix and St. George reliquary. Photos courtesy of Fordham Libraries
Imagine holding in your hands a crucifix that belonged to 16th-century Catholic saint Sir Thomas More. Or a prayer book that belonged to Mary Queen of Scots.

Those special items will be available on Tuesday, Nov. 8, from 9:30 a.m. to 12:30 p.m. in the O’Hare Room, in Special Collections at Walsh Library, where visitors can hold them and learn more about them. They’ll be presented by Jan Graffius, Ph.D., the curator of collections at Stonyhurst College, Lancashire, who brought them to New York City as a complement to the exhibit on the Tudors at the Metropolitan Museum of Art. She arrived at Fordham on Nov. 5 with 10 or so 15th- and 16th-century books and items owned by Stonyhurst, Campion Hall—the Jesuit hall at Oxford University, and the British Province of Jesuits. 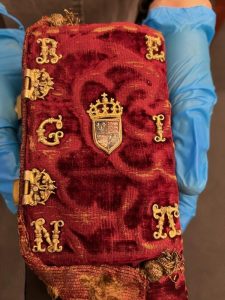 Other objects currently in Walsh Library include Katherine Bray’s Book of Hours, St. Campion’s Decem Rationes, and the St. George reliquary of Sir Thomas More. All of the objects that will be shown at Fordham are featured in this short video.

Graffius spoke to a small group of library staff and administrators on the morning of Nov. 7.

“Perhaps the most powerful impact of Dr. Graffius’ visit to Walsh Library was her eagerness not simply to share the precious objects she had brought with her, but to give us an almost intimate connection with them,” said Linda LoSchiavo, director of Fordham Libraries.

“Without a piece of glass or a velvet rope separating us from the prayerbook of a Tudor monarch, or the adolescent scrawls in a text belonging to the young John and Charles Carroll, we were able to stand only inches away from items that, under any other circumstances, we would have to cross an entire ocean to get a glimpse of. Jan Graffius’ encyclopedic knowledge of her collection and the history surrounding it is matched only by her enthusiasm and warmth as a speaker.”

Graffius will be bringing the items to other locations in New York City and the U.S., including the Church of Ignatius Loyola in Manhattan. Though these items will not be on display at the Met, Graffius did contribute to the museum’s exhibit by installing a cope (vestment) belonging to Henry VII, which was contributed but the British Province of Jesuits. The Met exhibit, titled The Tudors: Art and Majesty in Renaissance England, will be on display until Jan. 8.