skip to main content
Return to Fordham University
You are at:Home»Arts and Culture»Tribute to Artist Frederick J. Brown Will Benefit Bronx African American History Project
Photos of Frederick J. Brown’s paintings courtesy of Bentley Brown
There are many places in New York City that Bentley Brown, GABELLI ’17, could’ve chosen to hold a tribute to his father, the artist Frederick J. Brown. Perhaps the most obvious would have been SoHo, where his father’s loft studio at 120 Wooster Street grew to be a central gathering place for artists, musicians, writers, dancers, and performance artists. 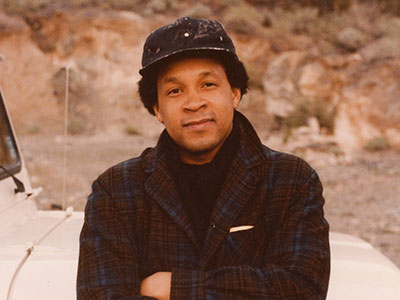 Yet the younger Brown chose Fordham’s McGinley Ballroom for the benefit event on Saturday, Oct. 20, because of one quality that thrives in the neighborhoods and people that surround the Rose Hill campus—diversity.

“We’re trying to shine a light on a story that hasn’t really been told,” said Brown, who conceived the idea for the event, which he dubbed “120 Wooster Street,” with his longtime mentor, Mark Naison, Ph.D., professor of history and African American Studies.

“We want to recreate a time period, and show students, faculty, administrators, and people from the [Bronx] community what it was really like in 1970s SoHo, and do it in a way that incorporates art and music.”

Prints and original works by the artist will be on sale at the event; proceeds will benefit the Bronx African American History Project, which Naison directs and where Brown served as a researcher during his time at Fordham.

Shining a Light on the 1970s SoHo Art Scene

Now a graduate researcher at New York University, Brown said the Bronx seemed like a natural fit, since the art, music, fashion, and even food culture of the borough’s black and brown residents are often left out of the larger narrative of culture in New York City.

The same could be said of SoHo’s 1970s art scene, Brown said.

“That era [of the art and music scene has]often been told from a white perspective, but the reality is that the black artists were the creatives, the avant-garde. That was a time and space where black artists were creating the style of the times,” he said.

Frederick James Brown (1945–2012) was a New York City and Arizona-based American artist whose work engaged with American history, music, urban life, and spirituality. He was the first American artist to display his works at what is now the National Museum of China.

Born in Georgia and raised on Chicago’s South Side, he studied art and psychology at Southern Illinois University. He taught for several years in Chicago and Carbondale, Illinois, and traveled to Europe in 1969. In 1970, he moved to New York’s SoHo district to become a professional painter, supporting himself by teaching part-time at the Brooklyn Museum, York College, and the School of the Visual Arts.

Brown’s paintings of the early 1970s were large, bold abstractions based on the abstract expressionist tradition of the art department at Southern Illinois University. In 1975 Brown met the noted American painter Willem de Kooning, whom he would go on to refer to as his “artistic godfather.”

Brown settled in a loft in SoHo during the New York art renaissance of the 1970s and 1980s. There, he collaborated with jazz musicians like Ornette Coleman and Anthony Braxton.

It was a return to his formative years, the younger Brown said. 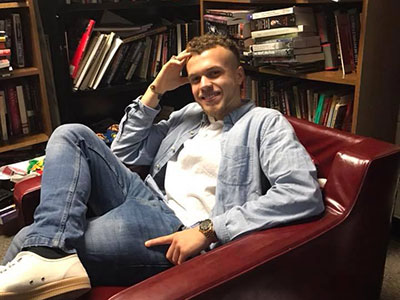 “My father wasn’t musically inclined, but he grew up around it as Southside Chicago was a hotbed for black music,” he said. “My grandfather owned a shoe shine parlor and juke joint. My dad met all those people growing up, such as the folks behind Chess Records, who made Muddy Waters and Etta James the household names they were.”

Thus, his art began immortalizing the jazz musicians, mentors, and colleagues who had exerted the greatest influence on his life.

“He had switched to more figurative work. He and a few others were pioneers of what became figurative expressionism,” Brown said. “Folks may be familiar with Jean Michele Basquiat, but my father had started long before him. And then from there he moved into portraiture of the jazz figures. These musicians aren’t just musicians, but people, and heroes of the American narrative.”

With this Fordham event, Brown wants to continue his father’s legacy of illuminating that narrative.

Honoring a Tradition of Art and Music

A selection of Frederick Brown’s works will be on display at the Oct. 20 event at Fordham, which goes from 6:30 p.m. to 11 p.m. Admission is free and open to the public.

Apropos of the artist’s work, there will also be music, courtesy of the Dale Fielder jazz quartet, organized by Kunle Mwanga, who once served as manager for Ornette Coleman. Brown also plans to tease a documentary he is working on for his dissertation about SoHo and black creative spaces.

The evening, emceed by Naison, will begin with a talk by the American poet, community activist, journalist, media personality, and politician Felipe Luciano.

“He and my dad were like brothers,” Brown said. “Felipe was coming up as a poet when my dad was painting.”

Brown said that his academic home of four years was a perfect place to cast a new light on the art scene that his father helped to define.

“I think that’s what academia is supposed to do—shift the way that we perceive things,” he said.