skip to main content
Return to Fordham University
You are at:Home»Arts and Culture»Time Through an Ancient Jewish Lens
This fourth-century mosaic from Hamat Tiberias (above) depicts the sun god, Helios, adorning the floor of a synagogue. It highlights the integration of Roman and Jewish notions of time. Photo by Sarit Kattan Gribetz
It’s that time of year when we think about time, the perception of which has been debated by scholars since, well, the beginning of time.

Time is also the focus of a dissertation by Sarit Kattan Gribetz, Ph.D., that has won the 2017 Manfred Lautenschlaeger Award for Theological Promise. Kattan Gribetz, an assistant professor in the Department of Theology, is a scholar of ancient Judaism and rabbinic literature, texts written between 200 and 600 C.E. in Roman Palestine and Sasanian Babylonia.  Her research examines how the ancient rabbis sought to distinguish Jewish rhythms of time from Roman time.

Even though they lived under Roman rule in the first centuries of the common era (C.E.), Jews used a different calendar. Romans organized their time according to a solar calendar and, instead of a week, they had a “nundial cycle” of nine days. Jews used a lunar calendar and a seven-day week with a weekly day of rest on the Sabbath. Jews started their days at sundown, while the Romans started their days at midnight. 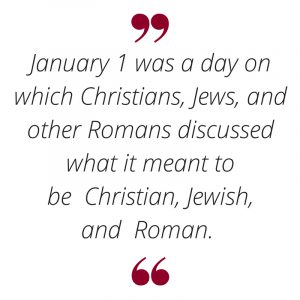 Yet, Jews needed to work with the Roman calendar for practical reasons even as they sought to distinguish their beliefs.

For example, rabbinic laws mandated when Jews could and could not engage with other Romans. For three days before major Roman festivals, Jews were discouraged from participating in any form of business transactions with their Roman neighbors.  The rabbis feared that they might inadvertently join in the celebrations.

“The [rabbinic]idea was to create communal boundaries between themselves and their neighbors,” she said. She compared it to someone abstaining from shopping during the holiday season so as not to participate in the Christmas festivities.

Jewish texts went well beyond avoiding Roman festivals; they also provided stories about the origins of the Roman calendar.

Some texts reinterpreted stories about Roman festivals, inserting Jews into the stories to make sense of the celebrations, said Gribetz. One narrative explains that the Roman festival commemorating Rome’s expansion in the East came about because the Jewish King Solomon married an Egyptian princess and practiced idolatry. As a result, the angel Michael stuck a reed into a “muddy alluvial deposit,” out of which emerged the geological foundations of the city of Rome.

“The rabbinic story goes on to explain that each time an Israelite king sinned, another part of Rome was built,” said Gribetz. “This sort of narrative blames the Jews for the political and military success of the empire that had conquered them, claiming that idolatrous Roman festivals were a direct result of past Jews’ sins of idolatry.”

These stories served as warnings to ancient Jews not to participate in the festivals because of the “cosmic effects” such participation might have on the course of history. But the stories also had a counterintuitive effect: they inserted the Jewish past into Roman history and made Jews integral members of the Roman Empire.

“It claimed that the Israelite kings were responsible for the founding of Rome!”

Along with rabbis, Christian bishops also expressed concerns about Roman festivals. On January 1, 404 C.E., the Roman New Year, St. Augustine addressed a congregation at Carthage for several hours while the New Year’s celebrations raged nearby.

“He warned his congregants not to leave the cathedral and join the rituals and festivities with the non-Christian Romans, but rather he told them to mark the time through prayer and piety,’” she said. “It was a way to cultivate a Christian identity distinct from other Romans.” The rabbis also warned against celebrating the festival, to which they refer by its Latin name, the Kalends of January.

“January 1 was a day on which Christians, Jews, and other Romans discussed what it meant to be a Christian, a Jew, and so on,” said Gribetz. “Eventually, once the Roman Empire fully Christianized, January 1 became a Christian holiday.”